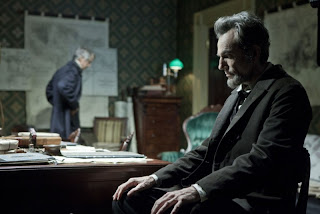 I, like most people, have high expectations for a Steven Spielberg film. I don’t expect a gloriously shot History Channel production which is exactly what “Lincoln” is. It's sad to think the more entertaining Abraham Lincoln movie this year involved vampires. There's something dramatically inert about Spielberg’s long-awaited Lincoln biopic. Even though he was a great man, a legend in fact, and a hero of this country, his story, about his last few months in office trying to pass the 13th Amendment which abolished slavery and helped end the civil war, doesn't necessarily make great cinematic drama. A fine (but most likely stuffy) stage play sure, which is what screenwriter (and playwright) Tony Kushner has done. But even more shocking is remembering that Abraham Lincoln was in fact a Republican. How times have changed!

It won’t be a shock to learn that actor Daniel Day-Lewis gives a terrific performance as the 16th President of the United States. The brilliant makeup and costume design help him effortlessly slip into the role. But does he give a great performance or is it just an impressive impersonation? Since there’s not actual footage of Lincoln one would never quite know so I chalk it up to a wonderful performance. He truly feels like someone who could lead a country as divided as the US was at that time (and to a point, still is today).  The entire cast does a great job fulfilling various historical figures. Sally Field, as Mary Todd Lincoln, chews the scenery in her equally over-the-top period dresses. She’s vying for that inevitable third Oscar nomination. The standout here is really Tommy Lee Jones as Representative Thaddeus Stevens. He injects the film with a small dose of emotion and even some humor, as does James Spader and his team of 13th Amendment lobbyists.

The most surprising aspect of the film remains how emotionally unattached I felt to the proceedings which play out like well produced History Channel recreations with outstanding production values. It's like watching 19th century C-SPAN, which I realize is something people may actually love: history buffs are sure to rejoice. And I gather it will make a useful learning tool in classrooms across the country. But like the courtroom scenes that bogged down the similarly themed “Amistad,” watching the representatives argue about the slavery bill is just not fascinating especially when you know the eventual outcome (spoiler: it passes!) Spielberg makes things as suspenseful as possible leading up to the vote but even the most skilled director of which he is can't make house sessions all that interesting. The movie could have easily been called Old White Guys Arguing. I'm not quite sure why I felt so unattached to the proceedings since a lot of this stuff has direct connections to what's going on today in this country today. We have a divided country that either love Obama or despise him. And watching Lincoln try to collect enough votes to pass a very divisive bill is not unlike the healthcare reform bill from a couple years ago. Lincoln was a great leader and an honest man which I believe is a lot of what Obama is also about.

“Lincoln” features all the behind the scenes skills one would expect from a Steven Spielberg production but none of the real fun or entertainment value. It feels like last year’s equally static “War Horse” but with a more familiar cast and without the emotional sappiness.  It’s a “serious” Spielberg film through and through but fails to be as engaging or as dramatically challenging as something like “Schindler’s List” or “Munich.” “Munich” weaved a fascinating line of entertainment and seriousness that worked thematically. Here it’s all business and no fun. The camerawork, music score, and period costumes and sets are all meticulously crafted and Day-Lewis is simply wonderful, but it’s an “important film” (and shameless Oscar bait) in search of a more entertaining and emotionally rewarding narrative. GRADE: B-
Posted by Chris at 7:26 PM

Having read this I believed it was really enlightening.
I appreciate you taking the time and energy to put
this article together. I once again find myself personally spending way too much
time both reading and leaving comments. But so what,
it was still worthwhile!

It is perfect time to make some plans for the future and it is time to be happy.
I have read this post and if I could I desire to suggest you few
interesting things or tips. Maybe you can write
next articles referring to this article. I desire to read
even more things about it!