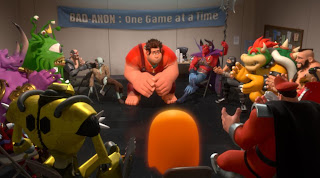 It appears Pixar and Wald Disney Animation Studios (they are, in fact, not the same thing if you were curious) pulled a good ol’ “freaky Friday” this year. The two have swapped creative bodies. Earlier this year Pixar, arguably the top notch animation production studio in the film industry today, released a Disney-fied film called Brave about a Scottish princess. It was fun and whimsical and had good animation as usual, but I found it to be a lesser effort for the animation studio. However, Walt Disney Animation Studios have just released a funny and altogether clever Toy Story-like film that has all the makings of a great Pixar film called “Wreck-It Ralph” (and Pixar had nothing to do with it). What gives? It’s Disney’s 52nd “animated classic” and it is indeed destined for classic animation status. There’s no Disney princess or fanciful songs, but it has all the great elements that make a great animated family adventure.

“Wreck-It Ralph” takes place in the video game world. Much like Toy Story was about seeing how children’s toys come to life after they leave the room, this film shows how video game characters have an entire world to their own inside their arcade machines. They can travel through electrical impulses from machine to machine through electrical cords and the power strip is like a mini Grand Central Station where many video game destinations await. We’re introduced to a game called Fix It Felix Jr. Which starts Felix as a handyman who repairs an apartment building after a giant bad guy name Wreck It Ralph damages it. The player’s goal is to play as Felix, fix the building and then throw Ralph off the roof and score big points. It’s basically a lot like the original Donkey Kong game.

But like most Disney characters Ralph isn’t all that bad and actually dreams getting something better out of life. He’s in a “bad guy” support group with members like Bowser from Super Mario and even one of the ghosts from Pac-man. He decides to “game jump” one day and check out Hero’s Duty, a violent first person shooter game ala “Call of Duty” where he wants to win a gold metal. Eventually he ends up in Sugar Rush game which is like Mario Kart set in Candyland. He meets up with a cute little tyke voiced by Sarah Silverman, who’s a glitch in her game and is rejected by other characters who refuse to let her participate in racing.

“Wreck-It Ralph” is a great movie because it plays with what audience members know about video games and has a lot of fun with it. Those gamers who grew up on Nintendo and Sega will get a kick out of the many fun references and in-jokes. The world that writers Phil Johnson and Jennifer Lee have come up with is rather fascinating. They come up with “rules” that actually make a whole lot of sense. For instance, video game characters always come back to life when they’re killed because kids come along put another quarter into the machine and the game starts over again. But when a character “game jumps” and enters a different game, they can die for real. Also, when an arcade game goes “out of order” the characters are forced to enter the Grand Central Station electric hub where they’re basically homeless. Like poor Q*bert who’s game was out of order.

There are so many great characters here and they’re voiced wonderfully. Jane Lynch is great as Calhoun the main character of Hero’s Duty as a Lara Croft tough girl who’s good with a gun. Alan Tudyk plays the ruler of Sugar Rush King Candy as a crazy hybrid of Willy Wonka and the Mad Hatter. And as Ralph, John C. Reilly injects some rather touching humanity into a character that many believe to be a bad guy but he obviously isn’t at all. And 30 Rock’s Jack Mc Brayer plays a digitized a version of himself as Felix who may just have the hots for Calhoun.

“Wreck-It Ralph” may not be the traditional animated film that Disney usually churns out but it features some truly memorable characters and a great story. To think Pixar had nothing to do with this seems rather odd but it certainly fits right in creatively with anything that Pixar has ever created. It’s truly a winner.  GRADE: A-

ã‚ªãƒ¼ã‚¯ãƒªãƒ¼ åº—èˆ—
Hello there, I discovered your site by means of Google at the same time as searching for a similar matter, your web
site got here up, it seems good. I've bookmarked it in my google bookmarks.


Hi there, simply became alert to your blog via Google, and located
that it is really informative. I'm gonna watch out for brussels.

I will appreciate for those who continue this in future.
Numerous folks will be benefited out of your writing.
Cheers!

Hi buddy, your blog' s design is simple and clean and i like it. Your blog posts about Online Dissertation Help are superb. Please keep them coming. Greets!!
Run4.co gswitch3.co Superfighters.co