We Sold a Zoo: “Life of Pi” is an Astonishing, Emotionally Engaging Visual Feast 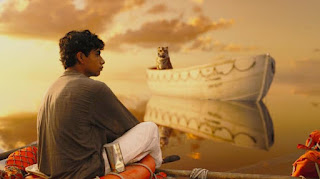 Who would have thought it was a good idea to cross “Cast Away” with “Slumdog Millionaire?” In “Life of Pi,” based on the popular bestseller, we get to witness a wonderful tale of survival and hope and life. It’s much like “127 Hours” from a couple years ago, except imagine trying to survive with a hungry Bengal tiger eying you for his lunch. Here we get the story of an Indian man named Pi who survives a shipwreck only to be stuck on a life raft in the middle of the ocean with a tiger also trapped on the raft. He must survive the elements and the beast who is his enemy. But he must learn to use the animal to help him survive and in so doing they make an emotional bond like none ever seen before. It’s all handled with assured direction from Ang Lee and some truly spectacular visual trickery.

We know from the beginning that Pi Patel (played as an adult by Irrfan Khan) survives his ordeal. We seem him talking with an author who wants to turn his story into a book. “Life of Pi” has a nice ring to it. He accounts his childhood in India. His family owned a zoo. He also discovered spirituality at a young age and begins following several different religions. When he was a teenager his family sold the zoo so they could move to Canada. They board all the animals on a freighter but one night during a storm the ship sinks. Pi is left alone on a lifeboat with several other animals: an orangutan, a hyena, a zebra, and a Bengal tiger named Richard Parker (due to a clerical error). Pi and Richard Parker are natural enemies, but Pi can’t bring himself to kill the animal. And so begins their harrowing tale of survival.

Most of the film is set during Pi’s teenage years (played here by Suraj Sharma) during his survival ordeal. The film uses a flashback narrative structure that sort of works, but kind of instantly zaps the film of some suspense since we know Pi survives intact. The present day scenes are nowhere near the visual feast of the rest of the film. Of course, that knowledge doesn’t really lessen the intensity of the experience, even if it takes a bit of time to get going. It’s truly fascinating to witness Pi’s extraordinary skills as he learns to survive and realize how much he actually depends on the tiger. Catching fish and keeping the tiger full keeps Pi’s mind occupied. So really, they depend on each other.

Watching a young man survive on a lifeboat is something that doesn’t necessarily lend itself to the most visually stimulating experience, but Ang Lee makes it simply stunning. He employs terrific use of 3D technology to tell his visually appealing story. Cinematographer Claudio Miranda captures some truly breathtaking images that are expertly staged by Lee. Take the flying fish sequence with its experimental playfulness of the screen aspect ratio. It helps the fish feel like they’re flying right at you. And for a film that’s about a boy and tiger on a lifeboat, there are no two shots alike.

The visual effects in the film just need to be mentioned. The use of CGI for the tiger is just simply amazing. It’s so lifelike that sometimes you find yourself questioning whether it’s real or not (there is some real tiger footage mixed in there). It really helps sell the believability of a story that seems unbelievable by nature (this is, in fact, not based on a true story). Lee and the actors really help sell the emotion and by the end of the film you really see the bond that has grown between these two living beings. Screenwriter David Magee has successfully adapted a book that was deemed “unfilmable” and together with the entire cast and crew has crafted a warm, and truly rewarding cinematic experience.  GRADE: A-
Posted by Chris at 8:01 PM

Pulsar Watches are conveniently offered by way of many rolex replica sale on the planet, as well as through several retail web sites only and savory costs ranging from hublot replica uk and going higher based on the quantity of functions. Nevertheless the price tag ranges generally suit the watches and absolutely everyone is bound to locate the fake rolex sale for themselves if they look amongst the vibrant collection of Pulsar Watches. Pulsar Watches are essentially the most loved brand because of the magnificent high quality of replica watches sale they supply its customers and at a very affordable cost range at the same time. Pulsar Watches could have got recognition due to its collaboration with replica watches uk but it has created its mark globally and it is a mammoth within the watch-making organization, and Pulsar Watcher are genuinely loved and bought by quite a few men and women all about the globe, as they sell substance with style, fine technologies, guaranteed durability, a wide range with diverse patterns for all types of people today at rolex replica sale desirable and inexpensive rates and it continuous to keep its standards.

There are times when I find it difficult to make decisions, but still have to do. I know people always have emotions so that there is no justice. But I still hope.
www.facebookbaixargratis.com.br

Thanks a lot for the post. It has helped me get some nice ideas. I hope I will see some really good result soon.
iogamez.com
Geometrydashonline.net

Thanks again for the blog post.Really looking forward to read more. Will read on…

Thanks for writing such a quality write-up! I hope other people get much help from this writing piece as well. Students struggling to write their assignments can opt for our online assignment help and get their coursework written by qualified assignment experts.
theworldseasiestgame.com worldshardestgame.online governorofpoker2.co