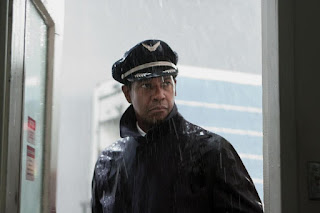 Robert Zemeckis, the Academy Award winning director of "Forrest Gump," hasn’t directed a live action feature film since 2000’s “Cast Away.” And now he returns with “Flight” which shares one thing in common with that previous film: a disturbing airplane crash. But the two films couldn’t be more different. “Cast Away” was a human drama about a man obsessed with time surviving alone on a deserted island. “Flight” is a very adult character study of an alcoholic airline pilot. Zemeckis always features top notch special effects and fun, tricky camera moves but "Flight" remains rather grounded in that area. It's really just a straightforward drama, with a harrowing and disturbing airplane crash sequence. And that is sort of a disappointment coming from a filmmaker whose movies always push the limits of what’s been seen on the big screen.

Denzel Washington is airline pilot Whip Whitaker. He’s divorced and has a son who he rarely sees. He’s also a hopeless alcoholic who isn’t quite aware of how serious his drinking is. But he is a brilliant pilot as in the film’s open sequence in which he’s able to land his airplane in a way that saves almost everyone on board. But how much of the plane crash was caused by the fact that he was drunk and high during the flight? That is the moral dilemma at the center of the film but from what the viewer can tell, the plane seems to have a malfunction and Whip actually prevents everyone on the plane from dying. But that doesn’t give him the right to fly planes while intoxicated.

After the incident, Whip is seen as a hero but many don’t know, until after a blood test is done, that Whip may not be the hero everyone thinks. Whip also meets a young drug addict while recovering in the hospital. She’s played by Kelly Reilly and she sort of reminded me of Robin Wright’s performance as Jenny from “Forrest Gump.” While the crash sequence is a brilliant piece of filmmaking the rest of the film can’t quite hold up. It sort of delves into movie-of-the-week territory which is sad considering the talent behind the camera. Zemeckis doesn’t using any spectacular camera moves, and why should he? This is an intimate study of alcoholism and how drinking controls one man’s life. Any fancy camerawork would call attention away from the story at hand (Zemeckis used his long time collaborator cinematographer Don Burgess) But John Gatins’ screenplay doesn’t offer many interesting plot twists to really make “Flight” anything all that special or memorable. It really just remains a showcase for Washington’s wonderful performance.

“Flight” is a mildly interesting adult drama that never quite takes off. There’s really not much to it besides that disturbing crash sequence and good acting. The human drama that follows is supported by a great central performance from its star (and a good, if brief, performance by John Goodman), but otherwise this feels like stuff we’ve seen before. It’s still miles ahead of the creepy motion capture films Zemeckis has spent the last decade making but lacks that interesting Zemeckis hook. If the ingenious filmmaker really wants to recapture the look and themes of his greatest work he’ll return to adventure or sci-fi filmmaking where he surely belongs. For now I guess “Flight” will have to do. GRADE: B-
Posted by Chris at 8:23 PM

Thanks a lot for sharing it, that’s truly has added a lot to our knowledge about this topic. Have a more successful day.
fleeingthecomplexgame.com Warwings.net Flipmaster.co