License to Thrill: “Skyfall” Just May Be the Best Bond Movie Ever 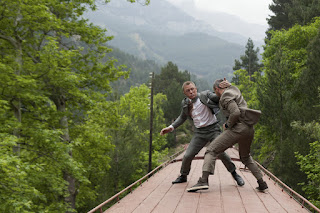 If any movie could convert a non Bond fan it would be “Skyfall.” I guess the third time’s the charm, as they say? “Casino Royale” rebooted the James Bond franchise in a wonderful way, but it was my first foray into the franchise and while I liked it, I didn’t make me really care to see any of the other films. “Quantum of Solace” was a big slump for the non-fan. It was boring and mostly unmemorable. “Skyfall” director Sam Mendes’ first foray into the action-spy series is a glorious piece made all the more terrific because not only is it a great James Bond movie, but it’s just a great standalone film as well. Having recently watched some of the old James Bond films made me appreciate this new entry even more, but it has everything a general fan of action films have come to like. It shows surprising emotional depth and a keen eye for splendid camera trickery and is a truly spectacular adventure.

“Skyfall” opens with a glorious chase sequence that almost rivals “Casino Royale’s” famous parkour chase scene that many have described as one of the series’ top action sequences. Bond (Daniel Craig) and fellow MI6 agent Eve (Naomie Harris) are in hot pursuit of a bad guy who has stolen a hard drive with classified information. Bond ends up presumed dead and doesn’t return to headquarters. But since he’s immortal he shows up extremely mad at his superior M (Judi Dench) since her orders caused Eve to mistakenly shoot him instead of the bad guy they were pursuing. Eventually this stolen hard drive takes Bond to various exotic locations until it’s revealed this is all the work of super villain Raoul Silva (Javier Bardem) who turns out to be a disgruntled former MI6 agent. He begins to hack into their system and even bombs the headquarters causing massive chaos and killing several agents. But his true target is M who he seeks deep personal revenge against.

“Skyfall” is so special for several reasons. It has all the trademark Bond things like the sexy, mysterious Bond girl, an over the top villain, martinis shaken not stirred, a terrific opening title theme and sequence (sung by Adele), and superior action set pieces. But this film has surprising character depth not previously seen in the other entries. Bond and M’s relationship is very fleshed out and M gets to become a more fully realized character (and we even get to see Ms. Dench fire a gun). We can credit that to co-screenwriter John Logan who gave surprisingly depth to such films as “Gladiator” and last year’s “Hugo.” The film is sprawling and long but never boring and flows nicely from one location to the next eventually landing at Bond’s childhood home called Skyfall where he proceeds to booby-trap the place ala “Home Alone” to catch the bad guys.

Oscar-winner Sam Mendes has never crafted a film of this scale before but his superior creative eye is certainly responsible for the sheer visual power of the film. Working together with fellow cinematographer Roger Deakins they have made such a visually scrumptious action film. The film’s opening and climax are amazingly filmed sequences in an altogether outstandingly well-made film. And all of the performances are top notch. Bardem is a truly wonderful and frightening and bizarre villain. This guy could be a flamboyant cousin to his Anton Chigurh.

“Skyfall” is a Bond film that longtime fans will love (with loving nods to the series) and new fans will enjoy as well. It’s everything one could want in a truly great Bond adventure without and of that truly corny stuff from way back in the 60s. I’d like to see Mike Myers try and attempt a parody of this.  GRADE: A
Posted by Chris at 2:00 PM

Thanks for the information you shared. Please share useful information with your viewers regularly
henrystickmangames.com
Friv.Pro