Oh Henry! Superman Returns in the Sort of Spectacular “Man of Steel” 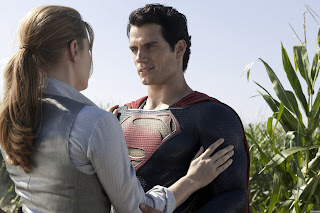 Is it even possible to make a really great Superman movie these days that will be universally loved? In 2006 Bryan Singer’s romanticized “Superman Returns” landed in theaters with a collective “meh” and I’m not quite sure anyone’s been clamoring for more. I enjoyed that film for what it was even though it was full of flaws (including a terribly bland Lois Lane and a mildly bland Brandon Routh). Zack Snyder’s “Man of Steel” hoped to correct all that. Now with the massively successful “Dark Knight” trilogy out of the way, Warner Bros decided to have another turn at bat with a darker, more brooding take on Superman. Even Christopher Nolan was brought in to help move things along. The result is sort of a mix bag: “Man of Steel” has some great sequences and is overall pretty exciting, but its focus on mind-numbing action and certain narrative choices stop it from becoming the definitive Superman movie.

A better title for Man of Steel might as well have been “Superman Begins.” After the success of the first Spider-man film and Batman Begins, the movie studios chose to follow the formula of telling various comic superhero characters’ origins. Why not start at the beginning and start a franchise? “Man of Steel” begins on the planet Krypton where a massive war is being waged and the planet is in imminent danger of a full on destruction because of its unstable core. General Zod (Michael Shannon) is basically being a big jerk and kills Jor-El (Russell Crowe) but not before he and his wife send their newborn son Kal-El in a space pod destined for planet Earth. Zod is banished to the Phantom Zone for his crime and is never to be heard from again, or until the plot requires his obvious return. It’s cool to see Krypton in all its CGI glory but this prologue goes on for far too long. We then cut to Kal-El as an adult now played by a homeless man version of Henry Cavill. We then see too many childhood flashbacks, which interrupt the flow of the film. His name is Clark Kent and we see him discovering his various superhuman abilities like x-ray vision and super strength. He’s raised by an Earthling couple played by Kevin Costner and Diane Lane. They are both great here. While I actually really liked these flashbacks, they are awkwardly placed and the film would have benefited from telling a more straightforward narrative.

Daily Planet reporter Lois Lane (Amy Adams) is introduced while on assignment somewhere near the North Pole. It just so happens to be the location where Kal-El can communicate with the consciousness of his deceased father. Kal-El saves Lois after being injured and she becomes intent on discovering her rescuer’s identity. And then eventually it’s revealed that General Zod had been released from the Phantom Zone after Krypton was destroyed. That’s convenient. He then travels to Earth and demand that they give up Kal-El or face dire consequences which include a third act of lots of mind-numbing action.

Most might have complained that “Superman Returns” didn’t have enough action. Well Man of Steel just may have too much. Now, the film’s action-packed third act is nowhere near as atrocious as something Michael Bay might have made, but it still feels like action and destruction to pad out an already slightly bloated runtime. If there was even a whiff of actual suspense then it would at least be justified. But how suspenseful is it to watch two guys who practically can’t be killed fight each other? Where’s kryptonite when you need it? But in the end the movie is all worth it because it sets up what could possibly be a better and more familiar Superman story. Clark finally puts on those thick black framed glasses and perhaps we’ll finally get to see a ripped Henry Cavill act like a nerdy buffoon.

Am I being too critical? Yes and no. It is summertime and movies tend to be a lot dumber. It must be because so many kids are out of school. But at the same time many people have been waiting patiently for a Superman movie that is just plain awesome. “Man of Steel” comes close. There are some pretty great visuals here and for the most part there are some great thrilling moments which are enhanced by Hans Zimmer’s pounding score. Cavill is a good Superman overall. He’s got the look and the charm. Thought he doesn’t get to spend enough time as “Clark Kent” so the jury’s still out on that. I do think this is probably the best the filmmakers could have done with such an outdated American character, at least until the sequel. But the film moves along too swiftly foregoing character development in order to get to the action, but if we don’t know the characters why should we care whether they live or die? In the end the movie reveals its biggest surprise: for a more traditional Superman film, “Superman Returns” might actually be the way to go.  GRADE: B-
Posted by Chris at 10:36 PM