Foster the People: The Thrilling “Elysium” is No Moon, It’s a Space Station 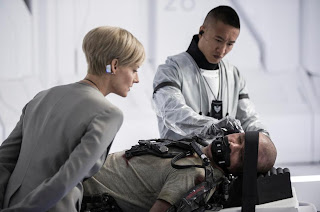 Jodie Foster finally makes her return to big sci-fi spectacles since starring in “Contact” over fifteen years ago. And it’s certainly a triumphant return. Foster also plays a bad guy - a wicked government administrator with a strange accent and power lesbian haircut. It’s the year 2154 and Earth is a rundown, overpopulated mess. The extremely wealthy have abandoned it to live on Elysium, a beautiful space station with lush greens and high tech Med-Pods that can cure any disease or ailment. But Foster refuses to let illegal immigrants in and refuses to use the technology to help those still on earth. Everything has its price.


Matt Damon stars as an ex-con named Max who works in the factory of an evil corporation that produces robotic equipment for Elysium. The Armadyne Corporation is run by the ruthless John Carlye (William Fichtner also from Contact). Foster’s character Jessica Delacourt, makes a deal with Carlye after he creates a computer program that would override Elysium and make her the President. Meanwhile, Max makes his own deal with smugglers to try to get himself onto Elysium to use a Med Pod after coming in contact with a fatal amount of radiation. The smugglers attempt to retrieve Carlye’s information for their own use – which turns out could actually make all citizens of Earth citizens of Elysium as well. Max is suited up with a metallic exoskeleton to make him a little stronger and to give the film some officially badass character design.


Did I mention that Delacourt also employs an evil and slovenly South African mercenary named Kruger played by District 9’s Sharlto Copley? Not only is this guy pretty gross looking, he’s extremely merciless. On Delacourt’s orders, Kruger will blow up citizens of Earth who try to breach Elyisum, much to the dismay of Elysium’s current President. There are actually a lot more human beings getting blown up in this movie than I would have predicted. And it’s pretty gross.


Elysium is a wonder of production design and high tech wizardry. Director Neill Blomkamp who turned the $30 million budget film District 9 into a surprise hit does the same with this $115 million dollar movie. It features wondrous state-of-the-art effects – including very realistic robot soldiers and flying space ships that one would never think were computer generated. The design of the ruined city of Los Angeles is amazing. We have seen countless versions of post-apocalyptic earth in movie after movie, and yet here it manages to do its own thing.


What’s the film’s main flaw however? We don’t nearly get to see as much of Elysium as I wanted. How do the Med Pods work? How was Elysium designed and built? And getting to see the planet Earth sort of degrade into the slummiest of places would be something interesting to see. And for what is essentially a fun summer movie, there seems to maybe be a little too much going on (all the stuff with Max’s friend Frey and her daughter is sweet but I wasn’t nearly as emotionally invested as the film wanted me to be). With so much happening the film cuts into the amount of time we get to see of Elysium. Though it’s possible Blomkamp wanted to keep Elysium a mysterious unknown place, which you really can’t argue against.


If you haven’t quite figured it out, while Elysium is essentially a fun summer sci-fi action thriller, like District 9, it’s actually an interesting social commentary about immigration and healthcare reform. Like the best sci-fi flicks it actually has something to say about the way we live. Some might find the heavy handed subject matter to be a turnoff, but you can’t deny the sheer creative artistry at work here. Blomkamp is obviously a talented artist with clear creative talent and is certainly an asset to the Hollywood system. I can’t wait to see what controversial subject he takes on next.  GRADE: B+
Posted by Chris at 7:33 PM

Even if youre not affluent abundant to breitling replica allow a Patek Philippe for your collection, there are added automated watch brands aural the ability of added boilerplate collectors. In fact, the industry is seeing a swiss replica watches about-face in watch absorption to adolescent collectors. Yes, even those in their 20's and 30's who accept the agency are searching at alpha and furthering watch collections.Watch-wearing saw a replica watches uk abatement as adaptable phones became commonplace, but timepieces are now generally apparent as both a appearance account and a way to accurate individuality.