Young Adult: The Young Cast of “The Spectacular Now” is Truly Spectacular 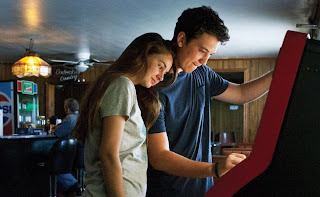 You probably won’t see finer acting from a young cast all year than you will in “The Spectacular Now.” The screenwriters of (500) Day of Summer have given the actors in this film something truly wonderful to work with (and it’s based on the book of the same name). Miles Teller and Shailene Woodley give truly impressive performances in a small intimate character study about two young people who couldn’t be any more different and yet they’re somehow drawn to each other. Their performances are genuine and emotionally raw, and it shames other films about teenagers that aren’t nearly as realistic.

There’s nothing truly spectacular about the story in “The Spectacular Now” but it’s all about the characters and their dialogue. Miles Teller plays high school senior Sutter Keely. He’s the goofy popular guy. He’s always the center of attention at parties and everyone just likes him. He likes to live in the now. He has no plans for the future. He’s also an alcoholic though he’s too young and naive to admit it. One day he meets Aimme Finecky (Woodley) one morning after waking up passed out on a random person’s front lawn. The two sort of instantly form a connection even though they’re wildly different. Aimme is the shy, reserved girl who doesn’t wear makeup and doesn’t think of herself as pretty. She’s never had a boyfriend and prefers to read. She’s introverted. He’s not. She has plans, he doesn’t. But Sutter has way more problems than he or anybody else would suspect, including a broken home life. His single mom is always working and he hasn’t seen his dad in years. And he can’t seem to enter a room – or a car – without taking a swig of alcohol. He’s a purposefully obnoxious type of character who we truly begin to care for as the film progresses.

“The Spectacular Now” isn’t a fancy production and director James Ponsoldt keeps things relatively low key, but what it lacks in fancy camerawork it makes up for in truly developed and realistic characters. This isn’t an average movie about teenage life. Sutter and Aimme’s meeting, friendship, and budding romance plays out with disturbing realism complete with a love scene that must be one of the most pragmatic and sensitive ever filmed. The connection you feel towards these people sort of took a strange hold of me. It was hard to connect with these characters at first, but as they talk and talk and talk you realize how accurately the relationship is portrayed. It’s almost documentary-like.

The film isn’t just a study of two young people who connect despite their differences. It’s a sometimes disturbing look at the adolescent life of a troubling alcoholic teenager. Sutter drinks at parties. Many teenagers do. But he also drinks at work. He finally tries to make a connection with his unsurprisingly deadbeat father Tommy (Kyle Chandler), and all the guy can provide for his son is alcohol at a local bar and he doesn’t even pick up the tab. It’s a scary revelation one that hints that this young kid who only lives in the now might just have a horrible future in front of him.

“The Spectacular Now” is a terrific coming-of-age drama without those genre trappings. It feels wholly fresh and original. It features terrific performances, a great cast, a beautiful story with an amazing sense of realism, and a sharp script. I'm a big fan of the writers' (500) Days of Summer, though this is a completely different piece of work. It’s funny when it needs to be, but this is a full-fledged drama with a capital D. Everyone is on the top of their game here, especially the film’s two young leads who continue to turn heads with each film they make.  GRADE: B+
Posted by Chris at 11:03 PM