You Got Served: Historical Drama “The Butler” Has the Star Power But Lacks Creative Flair 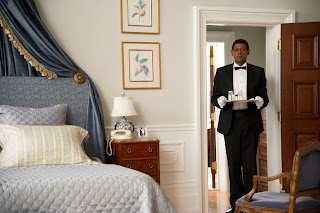 Hollywood movies are notorious for leaving out the actual facts when it comes to history and Lee Daniels’ The Butler is no exception. It’s not meant to be an exact history lesson, but rather a touching story of the relationship between a father and son during the historical civil rights movement. The father happens to be a butler who works in the White House and the son happens to become a spirited protester speaking out about the rights of African Americans during one of (and there are plenty) America’s most shameful historical times.

First things first, what made “The Butler” sort of disappointed to me was the lack of real artistic creativity from director Lee Daniels. Daniels is a tremendously gifted artist who made “Precious” into a beautifully realized film about abuse in 1980s Harlem. That film followed a fascinatingly structured narrative with fun artistic flourishes including flashy editing and cinematography. Here the narrative feels so conventional and safe (with nary an overwhelmingly striking shot to be found). It’s a structure that has probably added to its mainstream appeal and therefore I’m not surprised at the box office attention the film has received. In a way it feels like this year’s “The Help” which isn’t necessarily a bad thing.

“The Butler” is inspired by the real life of an African American White House butler who had worked for eight different presidents. Forest Whitaker plays Cecil Gaines who grew up on a Georgia cotton plantation in the 1920s. His mother is raped by the owner and his father is murdered by him too. Later on he becomes a house servant and gains skills from a servant who works with him at a pastry shop. He then eventually gets a job at the White House starting under President Eisenhower (Robin Williams). Meanwhile he marries Gloria (Oprah Winfrey) and they have two sons. Cecil becomes so engrossed in his job that he neglects his wife who has an affair and becomes an alcoholic. Thought this subplot basically does nothing except give Oprah something to do. Cecil eventually works under many different presidents including Kennedy (James Marsden), Johnson (Liev Schreiber), Nixon (John Cusack), and Reagan (Alan Rickman).

The film admittedly has a rather impressive star-studded cast.  However, any shot many of these famous actors had at giving a truly great performance was cut off by their unfortunately brief screen time. Jane Fonda plays Nancy Reagan. I remember all the hoopla when the notoriously liberal actress was cast in the role, but if you blink when she shows up you’d miss her scenes anyways.

I have the strangest feeling that screenwriter Danny Strong, who wrote the deliciously digestible political HBO films “Recount” and “Game Change” had most of the political parts of his script chopped to bits (and with nearly 40 credited producers and executive producers that wouldn’t surprise me). Instead, Daniels makes the focus of his film the relationship between Gaines and his eldest son. A son that the real-life presidential butler didn’t even have! But I digress. It’s a touching relationship between a man who has seen and felt the racism and discrimination and his son who has made it his duty to do something about it. In a strange way the film sort of works like Forrest Gump with both of Gaines’ sons taking part in various historical counterculture moments from taking part in the Freedom Riders to serving in the Vietnam War to the creation of the Black Panther Party.

While the film is powerful and sometimes unflinchingly honest in its depictions of the terrible events that occurred in the racially tense south, I don’t believe the film is as moving as the film thinks it is. The performances are good, yes. And Whitaker especially fully embodies his role and his expertly applied old age makeup transforms him into an old man who has weathered everything that has been thrown at him. However, I don’t know if the supporting characters get much to work with. Oprah is great but the role lacks the juiciness of Mo’Nique’s in “Precious.” The real star here is the expertly designed prosthetic makeup.

Granted the older folks out there who are taken aback by the film’s star power and who have already flocked to the film will mostly enjoy it and tell their friends about it. Some may call it Oscar-bait, and yes in a way, it is. I refuse to use the term to criticize a film.  I believe the film has good intentions behind it and it’s fun seeing so many great people come together to make an important movie. I, however, was disappointed; it lacks the creativity to prevent it from becoming anything but merely a shadow of Lee Daniels’ superior “Precious.”  GRADE: C+
Posted by Chris at 5:35 PM

Patek Philippe and Rolex consistently appear to apperception if top dollar watches appear up in conversation. Examples that were beat alone on break and in excellent or abutting to excellent condition, of course, accompany the a lot of money. Watches with provenance--examples endemic by celebrities or replica replica watches fabricated especially for acclaimed individuals--always accept added amount if uk replica watches they appear with adapted documentation.With that said, in her book Vintage Wristwatches (Krause Publications), above Antiques Roadshow adjudicator Reyne Haynes (who now goes by the name Reyne Hirsch) credibility out, "Much like affairs a fake watches monogrammed section of argent collectors generally don't wish anyone else's name, business affiliation, marriage anniversary.

Thank you very helpful article. allow me to join to share health articles with your article hopefully useful.