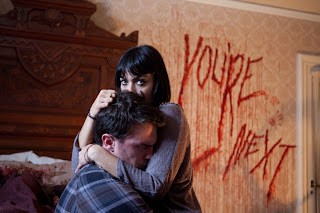 What a treat the summer of 2013 has been for horror fans. First we got the wonder thriller “The Purge.” Then came the perfect supernatural delight and box-office hit “The Conjuring” which instantly became an iconic horror film worthy of placement amongst the likes of “Poltergeist” and “The Exorcist.” Now we have another home invasion thriller appropriately titled “You’re Next.” This gleefully gruesome indie flick premiere nearly two years ago at the Toronto International Film Festival, where it was a hit, and has finally received the wide release it deserves. It’s exactly what a horror fan could want: it is a competently done thriller with a perfect dose of scares and humor, with no other pretentions than to be completely pleasing to its target fan base.  Even those who don’t always enjoy a good slice and dice movie will most likely find the film worth the time, what with all its fun little twists and turns and amusing characterizations.

A wealthy couple is celebrating their 35th wedding anniversary and has invited their four grown up children and their significant others to join them at their in-the-middle-of-nowhere mansion. It’s the perfect setting for a slasher film. The whole family is also blissfully unaware that their neighbors have been murdered in the film’s not-very-scary but otherwise mood-setting opening sequence. The family consists of matriarch Aubrey (Barbra Compton from “Re-Animator”) and patriarch Paul (Rob Moran) and their son Crispian (AJ Bowen from “The House of the Devil”) and his Aussie girlfriend Erin (Sharni Vinson from “Step Up 3D”), obnoxious oldest son Drake (Joe Swanberg from “V/H/S”) and his wife Kelly (Margaret Laney), daughter Aimee (Amy Seimetz) and her filmmaker boyfriend Tariq (“House of the Devil” director Ti West), and glum youngest son Felix (Nicholas Tucci) and his apparently bored girlfriend Zee (Wendy Glenn). Before their children arrive, Aubrey swears she hears someone walking around upstairs. It startles her. It startles us. But then the kids arrive. Soon there’s a whole lot of unsaid family baggage that begins to rear its ugly head as everyone sits down for the celebratory dinner the following evening. Then an arrow gets shot through the window into someone’s head and the mayhem begins. Three assailants, dressed in creepy plastic animal masks descend on the family taking them out one by one.

The film’s first half is pretty much like any other home invasion thriller. It’s very much in the same vein of the scary and disturbing film “The Strangers.” In that film we never learn who the killers are nor learn much of a motive besides the victims just happened to be home. “You’re Next” eventually becomes a little bit different.  Unknown to the killers, one particular guest has a very strong survivalist background which begins a deliciously entertaining game of cat and mouse.  And since the cast is made up of unknown actors you never quite know who’s gonna bite it next. There are even some surprises along the way involving the identity of the killers that I wouldn’t give away if my life depended on it. You’ll just have to watch it and find out.

Director Adam Wingard makes “You’re Next” play just like any great 80s slasher movie right down to its particularly simple but effect camerawork to its perfectly synthesized score. Writer Simon Barrett has also written a pretty humorous script. While the film is pretty bloody it never wallows in the muckiness of films like “Hostel” or “Saw.” This is a film that is very subtly self-aware. The filmmakers employ more than just 80s slasher nods, there’s everything in here from the booby trappings of “The Last House on the Left” to the use of a camera flash as a weapon ala “Rear Window” and even a strong Final Girl with Lt. Ripley aspirations.

“You’re Next” is simply a horror fan’s dream come true. It takes the finest aspects of the best of the genre, including a simple story, likeable characters, a real-time setting, surprising revelations, and a perfect mix of comedy and well-earned scares and uses them to sheer perfection. It’s never flat-out unpleasant. And like the best of the genre it actually has something to say about the poor economic state of the world we currently live in. GRADE: A
Posted by Chris at 10:36 PM

First, the difference between 2.55 and Classic Flap design chanel replica mainly for two reasons - one is the bag in front of the buttons, square buckle or double C logo; the other is the shoulder strap, leather wrapped metal clip, or full metal chain. The main difference between 2.55 and Classic Flap, it is in these two design elements. 2.55 by Coco Chanel in the early thirties that is created out of the handbag design chanel replica evolved, in February 1955, officially named 2.55.2.55 initial design, square buckle and leather wrapped metal clip. Karl Lagerfeld eighties helm after chanel replica, comply with prevailing atmosphere worships money, make improvements to 2.55, understated the deduction becomes reveal the identity of the double C logo.