Cape Gear: In the Mood for Some Quirky Ultra-Violence? See “Kick-Ass 2” 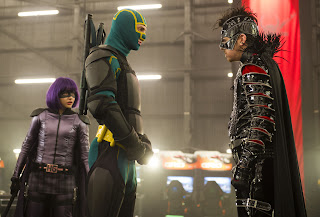 It’s funny how opinions can change. Back in 2010, when I saw the first “Kick-Ass” movie, I wasn’t quite sure what to make of it. I wasn’t sure what to make of the combination of extreme violence and comedy. It’s weird to picture a bright and colorful movie about "real life superheroes" so disturbingly dark and violent. Its odd tone just didn’t seem to work for me. I even watched it a few more times. After finally reading Mark Millar and John Romita Jr’s Kick-Ass comic (and Kick-Ass 2 and Hit-Girl), I finally got it. I still think it’s a story that belongs firmly in the world of the graphic novel. The book's violence is so extreme it would never seem to work as a film. I still sort of feel that way and this is coming from a person who has certainly enjoyed his fair share of cinema violence. But now that I can finally appreciate Kick-Ass as a film I’m glad to say I enjoyed Kick-Ass 2 as well, as will many of the original film’s fans. It doesn’t really add anything new and it doesn’t really need to exist but it certainly has a fun time existing. And for God's sake, don't bring children to see it.


Kick-Ass 2 picks up not too long after the events of the first film. High school student Dave (Aaron Taylor-Johnson) I still a loser goofball and spends his evenings as Kick-Ass. He meets up with other regular people who dress up as masked vigilantes who were inspired by Kick-Ass. The team is led by Colonel Stars and Stripes (an almost unrecognizable Jim Carrey). His former friend Chris D’Amico (Christopher Mintz-Plasse) has vowed vengeance for the death of his father at the hands of Kick-Ass and has been “reborn” as the world’s first supervillain named The Motherf*cker. The third storyline is the one that most people are excited to see: the return of the first film’s scene stealer Chloe Grace-Moretz as Hit-Girl. Her regular name is Mindy and she’s forced by her foster dad to give up Hit Girl and try to get accustomed to regular teenage life including life in high school. Her Mean Girls-like plotline about fitting in amongst a horrible group of snobby queen bees is definitely a highlight of the film. That and the use of one of the scariest looking female bodybuilders ever (played by Olga Kurkulina in her film debut) as one of The Motherf*cker’s evil henchmen named Mother Russia.


Your enjoyment of Kick-Ass 2 will be directly proportional to how much you enjoyed the first film. If you loved the first film odds are you’re going to like what you see here, so in a way the filmmakers (including new writer/director Jeff Wadlow) have played things sort of safe. They rely on plenty of beats of Millar’s comic while adding or changing things that certainly wouldn’t work in an R-rated wide release movie. if you want to see similar story in unrated form with literally some of the darkest humor out there check out Rainn Wilson in “Super.”


There’s nothing too special when it comes to the technical aspect of this entry. It features some standard effects work that sometimes looks cheesy. Wadlow uses standard action movie tropes like very fast camerawork and editing. Sometimes it’s hard to make out exactly what’s happening. The overall look and feel is rather uninteresting. Though on the aural side, I did like Henry Jackman and Matthew Margeson’s music.


Kick-Ass 2 is a fun movie if you like extreme violence mixed with silly comedy. It, like the first film, isn’t so much a movie about people who dress and act like superheroes. It’s about people who are seriously deranged and act out their violent aggressions on each other. It took me awhile to really “get” these movies, and questioned those who found it to be “awesome” and “badass,” but I do enjoy them now for what they are. Taylor-Johnson’s goofy demeanor helps him make us believe he’s actually a high school dweeb and Grace-Moretz’s charm steals the show yet again. Kick-Ass 2 is really just for a specific target audience and that’s fine because they will most likely dig it.  GRADE: B
Posted by Chris at 11:02 PM

Still later, the emergence of a variety of versions, that is, four chanel replica sale and combinations of these two elements, square metal buckle with a leather strap, the deduction is fully equipped with metal chain, double C clasp with leather strap metal, complete with double C clasp metal chain. I remember two years ago out of the Chanel 2.55 Reissue, is fully equipped with side buckle metal chain. chanel replica sale childhood growing up in an orphanage, 2.55 inside the maroon leather represents Coco's childhood, because the orphanage for orphan who wear the uniform is the color. 2.55 pairs of cover design also has its little mind, the above first cap in a dark zipper folder, there is a collection of his own love letters chanel replica sale.