Woman on the Verge of a Nervous Breakdown: Cate Blanchett Mesmerizes in “Blue Jasmine” 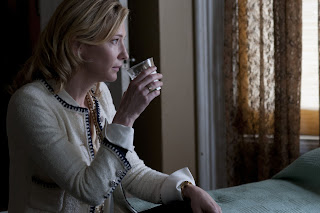 That’s more like it, Woody. “Blue Jasmine” is easily Woody Allen’s best movie since 2005’s “Match Point” (though I’m someone who actually loved his underrated “Scoop”). And it features one of his most interesting and complex characters written in years. It’s arguable one of the best roles he’s written. Ever. Cate Blanchett fills the shoes of a wealthy socialite whose life has practically crumbled. And if you know anything about Allen’s dour sensibility I can give you two guesses as to whether she’s able to put herself back together again. She’s as strong a female character as Annie Hall was; equally neurotic but on the complete opposite end of the personality spectrum.

I wasn’t quite sure what to make of the theatrical trailer for Blue Jasmine. It seemed to be a comedy though it also appeared to be a drama. It’s essentially a drama, with a somewhat dark undercurrent, though it does have a few hilarious jabs. Allen has proven himself a master at mixing comedy and drama whether it’s a classic like “Crimes and Misdemeanors” or the lesser seen “Melinda and Melinda.” “Blue Jasmine” begins with Jasmine (Blanchett) arriving in San Francisco. She’s visiting her working-class sister Ginger (Sally Hawkins) in hopes of possibility putting her life back together. Her rich, disgraced husband Hal (Alec Baldwin) had been arrested for embezzling and committed suicide in prison.  Now this once wealthy, middle-aged New Yorker must find her purpose in life. Oh, and she’s completely crazy. Like pill-popping, constantly drinking crazy. Like talk to herself on the street crazy.

Allen juxtaposes these present day scenes in San Francisco with Jasmine’s past life in New York. We follow her as she gets accustomed to living the high life in New York. It’s all glamour and party and Louis Vuitton. Actually for a Woody Allen film, the filmmaker actually seems pretty critical of this lifestyle. He usually displays wealthy New Yorkers in a positive light, but here he seems a little more hesitant to praise this lifestyle, which makes sense in the cash-strapped world of 2013. Allen fills his movie with wonderful performers like Bobby Cannavale as Ginger’s goombah-ish boyfriend, Andrew Dice Clay as Ginger’s goombah-ish ex-husband, and Louis C.K. as yet another possible love interest for Ginger. Then there’s Peter Sarsgaard who isn’t playing yet another creepy pervy guy. The pervy guy role goes to Michael Stuhlbarg as a dentist who Jasmine begins working for.

Cate Blanchett remains the central character throughout the film. Her scenes with Alec Baldwin slowly reveal the sad person she has become and the present day scenes in which she tries to fit into his sister’s lower class lifestyle is simply a joy to watch. The movie isn’t happy by any means, but it’s completely compelling watching an actress with as much talent as Blanchett simply shine in such a complex role. She’s the typical neurotic character we’ve come to know and love in Allen’s films, yet there’s such a strong sense of tragedy that it’s easy to forgive the character from making more than one bad decision.  Her third act relationship with Sarsgaard’s character in which she begins an elaborate rouse to disguise her horrible past is equally uncomfortable and gripping.

Blanchett is simply stunning here. And this an actress who’s stunning in almost anything. It’s a performance that blows all her others out of the water. Allen’s screenplay is dramatic, comedic, dark, weird, and original in all the right doses. It’s certainly destined to be one of Allen’s biggest hits. I’m sure those who enjoyed the lighthearted fun of “Midnight in Paris” will be taken aback, but for longtime Allen fans who have been with him during his highs and lows will find “Blue Jasmine” certainly worth their time.  GRADE: A
Posted by Chris at 5:07 PM

at this time I will share articles about health hopefully can be useful for everyone.