A Bug’s Wife: “Ant-Man & the Wasp” Continues the Lighthearted Fun of Its Predecessor 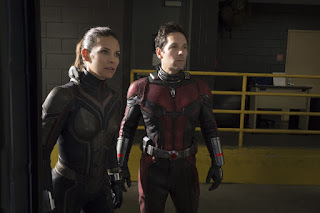 It turns out “Ant-Man” was exactly what the Marvel Cinematic Universe needed: an enjoyable lighthearted heaping of fun. It was first MCU film released after “Avengers: Age of Ultron” and it was a refreshing palette cleanser. It turns out, its own sequel “Ant-Man & the Wasp” functions in much the same way after the truly astonishing but intense experience that was “Avengers: Infinity War.” Comedy is always the best medicine and there’s no better proof of that than the hilariously charming antics of Paul Rudd as Ant-Man. Set after the events of “Captain America: Civil War,” this sequel finds our hero Scott Lang under house arrest. Of course that won’t stop him from helping rescue Hank Pym’s wife from the “quantum realm.” It’s all lighthearted fun and the perfect antidote to the ten years of MCU films that continue to be entertaining if emotionally draining.

“Ant-Man” was a comedic heist film essentially. “Ant-Man & the Wasp” isn’t quite as cut and dry; I’d more of a rescue mission film but not quite as focused story-wise as its predecessor. Our hapless hero Scott Lang (Rudd) having attempted to leave his life of crime behind him, finds himself with an ankle bracelet for violating the Sokovia Accords in “Civil War.” At least now his daughter and ex-wife have forgiven him so there’s no family drama there. The family drama this time consists of Hank Pym (Michael Douglass) experimenting with the possibility of entering into the subatomic “quantum realm” to rescue his wife Janet (Michelle Pfeiffer) who went subatomic decades earlier and was assumed dead. But since Scott went subatomic and returned unharmed it seems likely that Janet could possibly still be alive. Is it preposterous? Oh my yes. Is it entertaining as hell? You bet.

And let’s not forget Scott’s new partner “The Wasp” played by Evangeline Lilly in one of her most charming performances yet. As Hank’s daughter Hope, Lilly imbues the film with warmth and emotion that has somewhat eluded the actress up to this point. She shares incredible chemistry with Rudd and her onscreen father as well. These people are so likable that their charm really carries the film. And I haven’t even mentioned Michael Peña as Scott’s former prison buddy who has some really great comedic moments here. The comedy works so well in these films because director Peyton Reed made films like “Yes Man” and “Bring It On.” Sure, not exactly comedy treasures, but the guy knows what he’s doing. The action scenes are gripping, the shrinking and growing mechanics are clever, and the humor is funny.

Of course we all know a super hero movie is nothing without a decent villain. Here we get a mysterious figure in a white costume not unlike Lang’s shrinking Ant-Man getup, who is molecularly instable and can walk through objects, including walls. This “Ghost” (played by “Ready Player One’s” Hannah John-Kamen) adds a fun mystery to proceedings and the character’s story arch is unpredictable and interesting. There are other appearances from Laurence Fishburne and Walton Goggins that don’t add too much to the proceedings.

“Ant-Man & the Wasp” feels almost borderline insignificant compared to the other strong MCU efforts this year “Black Panther” and “Avengers: Infinity War” but it’s no less enjoyable or well-made. You can easily watch the Ant-Man films without the baggage of ten years of films to wade through and be just as entertained. And the whimsical music themes from Christophe Beck is among the MCU’s most memorable. These films really remind me of how fun the Sam Raimi Spider-Man films were to watch when they first came out. Bright, colorful, fun and oozing with charm and humor.  GRADE: B+

This is a wonderful post. I enjoyed the information lot. I will bookmark this page. Thanks for sharing this information.
abcya | hooda games