Greece Lightning: Fun Follow-up “Mamma Mia! Here We Go Again” Will Be Your Mom’s Favorite Movie of the Year 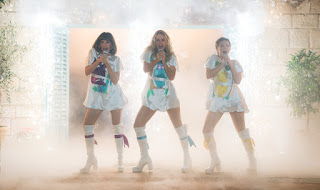 Since finally winning her elusive third Oscar Meryl Streep probably had enough of Mamma Mia! Yes, a majority of Mamma Mia! Here We Go Ago is, in fact, Streepless but it’s ok because the new cast is really game for a campy fun time. The first “Mamma Mia!” was a fun and silly jukebox musical about a girl trying to find the identity of her father before her fairytale Greek isle wedding. Everyone saw it because they love either love ABBA music and enjoyed the Broadway musical, or just because looked fun and silly. Released almost ten years to the day as the first film, “Mamma Mia! Here We Go Again” is a surprisingly well-made musical that features more impressively staged musical numbers, better singing, and thankfully lacks the sappy corniness that zapped the first film of pure greatness. Sure, this Godfather Part II-like prequel/sequel isn’t precisely necessary and its story is yet again strung around (even more) obscure ABBA songs but the cast is uniformly strong and everyone seems to be having a fun time. And then there’s Cher who looks like she just stopped by to pick up a paycheck.

Odds are you know whether or not you’re going to like “Mamma Mia! Here We Go Again.” It does offer everything you enjoyed about the first film but this time there’s a new person at the helm. That would be director Ol Parker who imbues the film with a cinematic quality that was severely lacking the first time around. The first film was clunky, corny, and offered cringe-worthy directorial choices that were better left for the stage. This time the world of Mamma Mia is opened up and feels more like a film than the stagey original.

And since everyone cares about the plot of an ABBA jukebox musical here it is. This time around Sophie (Amanda Seyfried) is getting ready for the grand re-opening of the Greek hotel she took over from her mother Donna. It turns out Streep’s character has previously passed away the year before. The real drama comes in the form of events in the past where we follow a young Donna in 1979 through her Big Fat European Vacation. It is here where she meets Harry, Sam, and Bill who are all Sophie’s possible fathers.

There’s not really much more to say and there’s hardly any real tension but the songs are performed with enthusiasm and that’s really what matters. The younger actors are generally pretty sensational in capturing the youthful versions of the cast members we’ve come to know so well. Lily James really captures Streep’s character’s essence and has an outstanding voice; she makes for an extremely likable lead. The same can be said for her best friends Tanya (Jessica Keenan Wynn) and Rosie (Alexa Davies) who are fantastic stand-ins for Christine Baranski and Julie Walters respectively. The casting team also work wonders with the hunky threesome known as Harry (Hugh Skinner), Bill (Josh Dylan), and Sam (Jeremey Irvine).

In conclusion, the songs here are good; they even reuse some of the more popular tracks from the first film. After all you can’t have a movie called Mamma Mia and not sing the title tune. Even the lesser known songs will likely become earworms after several spins on the soundtrack. You can’t fight the power of ABBA’s absolutely catchy discography. The film is overall tighter and more confident than its predecessor taking on an “ambitious” dual plot structure even if the present day scenes take on a more melancholy tone than the more fun flashback sequences. The script from Parker (and Catherine Johnson and Richard Curtis who have story credits) works well enough if somewhat less focused this time around.

Oh wait how could I not mention Cher? The fact that she’s practically shoe-horned in at the end is unsurprising since her casting feels like a complete stunt to begin with. Let’s forget the fact that Cher is only 3 years older than Streep in real life and she’s playing her mother, but her rendition of Fernando is great even if her sound doesn’t quite fit in with everything we’ve heard previously. I guess ten minutes of Cher is supposed to make up for a practically Streepless film but at least the film has an ambitious quality that is completely charming. Bottom line? Your mom is gonna love this thing.  GRADE: B+

In lieu of the underwhelming trailer, here's the first musical number from the film, "When I Kissed the Teacher:"