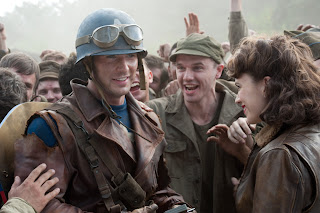 “Captain America: The First Avenger” is a lot better than it has any right to be. It has been the fourth superhero comic book adaptation movie of this summer. I myself have found myself going through superhero fatigue with these and what with all trailers for such anticipated flicks “The Dark Knight Rises,” “The Amazing Spider-man” and “The Avengers” (all due to hit theaters next summer). By all accounts “Captain America” should just be a slog to sit through. It is nowhere near a slog and is, in fact, a superior action flick that just happens to be a superhero movie. Anyone who thinks it’s good just because it came out after that stinky “Green Lantern” movie should realize that this film stands wonderfully on it’s own as a great piece of pulp action entertainment. It has a great look and feel, and while it employees CGI, it doesn’t over-rely on it like that “Lantern” movie. Sure it has some silly elements, but it never seems silly. It’s a rollicking good time if you ask me.

“Captain America” uses CGI in a way I haven’t really seen before. It is used to turn the buff actor Chris Evans into a skinny, short guy who just wants to enlist in military to fight in World War II. His name is Steve Rogers. Like most men in the early 1940s he felt the need to serve his country, but being such a weakling has cost him his right to serve his country and fight. His best friend Bucky (Sebastian Stan) has served and Steve is sick and tired of being the lame guy who not only doesn’t get any respect but doesn’t even know how to talk to women. He catches the eye of a German scientist aiding the US played by Stanley Tucci employing a thick-as-molasses German accent. He convinces Colonel Philips (Tommy Lee Jones) that Steve would be a perfect specimen for their new experiment. They want to bred “super soldiers” in hopes of destroying Hitler and his Nazis and their fictional science division called HYDRA. HYDRA is run by the equally sadistic Johan Schmidt (Hugo Weaving) who secretly plans on usurping Hitler and the rest of the world.

Of course this wouldn’t be a comic book adaptation if it didn’t have some silly science-fiction stuff. Sure HYDRA isn’t real but it’s placement in this historical setting is pretty fascinating. The film sort of works as an alternative history flick similar to “Inglorious Basterds.” (and look and feel of a cross between “Indiana Jones,” “The Rocketeer” and “Sky Captain and the World of Tomorrow”)Sure we all know what really happens and what’s real, but it’s fun to see some fictional stuff thrown in for entertainment value. Schmidt wouldn’t be a real super villain as just a human, and soon it’s revealed he’s in fact Red Skull as he rips off his rubber human face. He sort of reminded me of red version of Jim Carrey in “The Mask,” without all that loony slapstick stuff of course. The movie, which is an origin story, like all the other super hero films this year, does a great job of presenting with this sort of alternate reality where this super powerful technology exists in the 1940s. Stark Industries (as we’ve seen I the Iron Man movies) is responsible for the super solider experiment and it’s a great way to connect this wonderful world Marvel has created.

The film offers some pretty standout performances and action sequences. Evans, as charming as ever, works well here as the buffed up soldier. And while he quickly becomes brawny, his personality is still of that skinny patriot who just wants to serve his country. I liked the way the film, which is filled with all that World War II “I Want You” all-American propaganda, into more of a satirical look at this point in our history and refuses to let any political agenda get in the way of really fun and exciting action sequences. A scene that has Rogers stealthy moving behind enemy lines to save his friend Bucky (and not once a female damsel in distress) is pretty suspenseful and well-done. All the other action scenes are entertaining and never boring or repetitive. Evans chemistry with a female SSR officer played by Haley Atwell is so strong there was a moment I was moved to tears.

“Captain America: The First Avenger” is a great summer movie. It has action and adventure, and it’s funny and sweet, and yet after three other super hero movies, still feels fresh. I can’t say the movie is a NECESSITY or anything. It exists purely for its summer entertainment value. But director Joe Johnston employs enough excitement and superb period detail (and wonderful camerawork by Shelly Johnson) that it at least feels worth your time and money. It has a wonderful tangible quality that is as easy on your brain as it is on your eyes. GRADE: A-