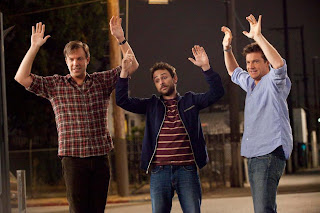 Forgive me for spoiling one of my favorite lines from “Horrible Bosses,” a hilarious new comedy (I might be paraphrasing here): “Ever watch that show Gossip Girl? I fingered myself to Penn Padgley so hard I broke a nail.” That’s a line you would never suspect would be uttered by Jennifer Aniston, an actress who has finally found a role that will make her haters think again. The problem with Ms. Aniston is her lack of diverse roles. You can only watch her same romantic comedy shtick so much before you just want to vomit (although I didn’t quite hate “The Switch”). “Horrible Bosses” is a hilarious, ensemble dark comedy with a top notch cast that gives it their all and it succeeds with flying colors.

Funnymen Jason Bateman, Jason Sudekis and Charlie Day, as Nick, Kurt and Dale respectively, all have horrible bosses. They can’t stand their employers all for different reasons. Nick’s boss, played by Oscar winner Kevin Spacey is just a mean prick. He works him too hard and is willing to make him look like a fool in front of the other employees. He’s even able to convince Nick that there’s not even another available job out there because he has personally vowed to make sure that Nick couldn’t land another job out in this terrible economy. Nick’s new boss is played by bad boy/heartthrob Colin Farrell in a way you’ve never seen him before. His role as the slimy, cocaine-sniffing Bobby Pellitt can sort of be compared to Tom Cruise’s role as the grotesque movie executive from “Tropic Thunder.” But that to me always seemed as gimmicky as it was entertaining. Here it feels legit. Farrell is actually giving a performance, even if he doesn’t get a Golden Globe nod. And lastly, and almost perfectly, Jennifer Aniston is the sexually harassing dentist who makes life a living hell for poor sap Dale who’s recently engaged. He wanted to be a dentist but never made it and is forced to deal with his sexually charged boss, as her assistant, who insists on molesting patients, walking around without a shirt on and trying to get in Dale’s pants.

Obviously finding a different job is out of the question. The next logical step? Murder. These three goofs head to the bad part of town, with direction from “Gregory” the Indian-accented voice on the other end of Nick’s OnStar car service. They meet up with Jamie Foxx’s Dean “motherf*cker” Jones who gives them advice on how to commit murder for a small fee of five thousand dollars. Let it be known that later they find out Jones’ past crimes hilariously consisted of pirating movies. What follows is a sort of “Strangers on a Train” plot in which each guy commits to killing each other’s boss. I shall say no more, as the film’s witty screenplay by Michael Markowitz, John Francis Daley and Jonathan Goldstein) offers way too many fun twists and turns (and surprising suspense) for anything to be spoiled here.

There are several reasons why “Horrible Bosses” is just a wonderful and smart comedy. The entire cast just goes for it. Like I said, Farrell and Aniston (in limited but outstanding roles) and definite standouts who play completely against type. They’re not necessarily thought of as “funny people” but here they really get to shine. And they’re not just portrayed as jerks. Sure all three are jerks, but that doesn’t stop them from being developed and having the change to be funny as well. The chemistry between the three male leads is tremendous. They’re like the three stooges of the 21st century (although there’s no slapstick to be found here of course). I can’t wait to see the deleted and alternate takes on the Blu-ray, which I’m sure are numerous. I liked how the film goes where it goes. Let’s just say it gets a little dark and I was completely surprised and delighted by that. I mean this is a movie about three guys planning to commit murder. So I guess I shouldn’t be too shocked. Director Seth Gordon, who’s only previous feature length film credit is the critically drubbed “Four Christmases” (althought he worked mostly in TV and feature docs) shows an assured hand here and paces his film so we’re never bored and always surprised. This is a movie that feels like it was made for “The Hangover” crowd but is much smarter and wittier.

“Horrible Bosses” is yet another winning summer comedy. After “Bridesmaids” and “Bad Teacher,” (all three being wonderfully original concepts) I’m convinced that these are the real blockbusters of this season. You don’t need comic book movies when great acting and clever writing are the real heroes at your multiplex. GRADE: A-

Wow that was odd. I just wrote an extremely long comment but after I clicked submit my comment didn't show up.
Grrrr... well I'm not writing all that over again. Regardless, just wanted to say superb blog!

Hi, I find reading this article a joy. It is extremely helpful and interesting and very much looking forward to reading more of your work.
Pinoy Tv Show
Pinoy Tv Replay

I wanted to thank you for this great read!! I definitely enjoying every little bit of it I have you bookmarked to check out new stuff you post.Myasiantv