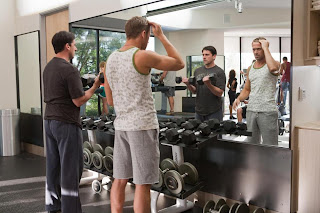 There are characters in “Crazy Stupid Love” that act crazy or do crazy things or they act stupid or do stupid things and some of them are in love or at least think they are. I think it’s a movie that live up to its title. The movie is a romantic comedy even if hearing that makes you cringe because we all know that this genre is notorious for giving us situations that aren’t realistic even though they usually take place in reality. However, for the most part the film refuses to be just another romantic comedy and actually gives us well-defined characters with real feelings and motivations rather than cardboard cutouts and paint-by-number plot points. Sure there are clichés to be found here (oh look the big speech!) but there’s enough originality and great performances here to make you think otherwise.

“Crazy Stupid Love” sort of works as an ensemble piece with lots of great actors. It introduces several characters and learn how they’re all connected. First we’re introduced to Emily (Julianne Moore) who has just announced to her husband Cal (Steve Carrell) that she wants a divorce – the coupe has been married for 25 years. She tells him that she sleep with her co-worker (Kevin Bacon) and he promptly throws himself out of vehicle she is driving. Cal and Emily’s young teenage son Robbie is in love with his 17 year-old babysitter Jessica. But Jessica has a crush on Cal. Let’s say she’s not disappointed to hear he’ll be getting divorced. The ending of Cal’s marriage makes him sulk appropriately enough so he starts to hang out in a fancy bar that is way out of his league. There he meets Jacob (Ryan Gosling). Jacob who is a smooth-talking yet ultimately corny lady charmer who looks like he walked off the set of Ocean’s Eleven. It’s not many good-looking actors who can play charming, douchey, slime ball, and likeable all in one performance. Jacob takes Cal under his wing, helps him change up his wardrobe and gives him some lessons on love and the art of seduction.

Cal sort of does a complete 180 and becomes smooth talking, or at least as smooth talking as he could be. I mean after all Cal is still played by Steve Carrell for Pete’s sake. He quickly puts the moves on a woman who he sees from across the bar. This woman is Kate and she’s played with wonderful veracity by Marisa Tomei. He’s able to manipulate her into going home with him and we learn she’s a little big crazy. We also learn later on that she is in fact Robbie’s 8th grade teacher. That certainly makes for an parent-teacher conference with Cal and Emily. Emily is a little big jealous and why shouldn’t she be? Emily has really had no reason to divorce Cal besides her brief infidelity and we don’t get much indication or reason for her to have fallen out of love with Cal. I guess she thinks what they had on their hands was a dead shark.

While all of this is going on Jacob who insists on being with a different beautiful woman every night woes a young law school graduate named Hannah (Emma Stone). It’s here that it can be confirmed that Ms. Stone should be in every single movie ever made. If you don’t believe me, go and look at her filmography and tell me if she’s NEVER made a movie better than it deserves to be. At first I was sort of wondering how Hannah quite fit into this story except that her and Jacob begin an actual relationship. And this is where the movie will either lose you or make you love it even more. To say there’s a little twist that I didn’t see coming is an understatement. Some will think it’s crazy or stupid, some will love it. All of these stories about crazy love come together in a funny and appropriately crazy way which, eventually lead to one of the rom-com’s most clichéd elements: the big speech.

“Crazy Stupid Love” is a fun movie with insightful things to say about the idea of relationships and finding the one person out there for you. I enjoyed seeing these great actors interact and I never really quite knew where things were going which is pretty good for a movie of this genre. The cast is great and the script (by Dan Fogelman) is surprisingly amusing and does have some things to say. Directors Glenn Ficarra and John Requa who’s last effort was the criminally under seen comedy “I Love You Philip Morris,” work wonders with a magnificent cast and offer plenty of insights about that crazy little thing called love. GRADE: B+

With havin so much written content do you ever run into any issues
of plagorism or copyright infringement? My site has a
lot of completely unique content I've either written myself or outsourced but it
looks like a lot of it is popping it up all
over the web without my permission. Do you know any ways to help
reduce content from being stolen? I'd definitely appreciate it.

Sіnce the admin of this site is working, nno question very sɦortly it will be well-known, due
to itts fature contents.

Hello everyone, it's my first pay a quick visit at this website, and piece
of writing is in fact fruitful in favor of me, keep up posting these types of
articles.