Craig’s Wrist: “Cowboys & Aliens” is the Best Alien Invasion Western Ever Made 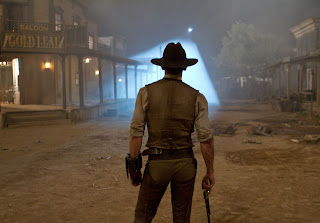 “Cowboys & Aliens” is a lot better than it ever should have been. I mean aliens invading a Western town in the 1800s? That just sounds silly. Westerns that have mixed genres haven’t exactly had the best track record. Remember “Wild Wild West?” It was a bomb. And for some reason some people hate “Back to the Future Part III.” Although to be quite honest I always wondered why alien invasion movies had to take place in either the present day or the future. Why couldn’t aliens invade Victorian England? Or how about an attack during the American Revolution? If alien technology is so advanced in these types of movies why wouldn’t they have attacked years and years ago when we humans wouldn’t have the technology ourselves to defeat them? Maybe I’m thinking about this too hard… in Cowboys & Aliens you won’t have to think too hard, but you’ll sure have a lot of fun.

Daniel Craig gives probably what I think is his most appealing performance in “Cowboys & Aliens.” Sure he’s good as James Bond but I think he has way more presence and charisma as a rugged outlaw. We meet him as a man who doesn’t know who he is in the middle of nowhere. It looks like he’s been attacked and he has some kind of strange metal bracelet on his wrist. Three unruly men stroll up on horses ready to blow his head off when he attacks all three. This guy means business. He strolls into town where we meet the locals. We finally learn this guy’s name is Jake and he’s possibly a wanted man. Then bamb! Aliens show up and start snatching up the townsfolk in one of the summer’s coolest action sequences. It’s sort of a Western version of something from “War of the Worlds.” Of course since this is the 1800s the term “alien” has yet to make itself known and these folks assume they’re some kind of demon race.

Harrison Ford shows up as Woodrow Dolarhyde who’s son (Paul Dano) has been abducted. Him and his men are hell bend on finding these demons and getting their friends and family back. He’s joined by Doc (Sam Rockwell) who runs the saloon and who’s wife has been taken. A mysterious and beautiful woman named Ella (Oliva Wilde) joins these men to find out what these demons really want. You’d think that a bunch of guys on horses with 19th century weaponry would be no match for a highly advanced alien lifeform. But that metal bracelet on Jake’s wrist is actually a deadly weapon that can shoot and kill anyone or anything just with the use of Jake’s thoughts (if I was 10 I would want one). It is cowboys vs. aliens big time.

Now an alien invasion movie is only as good as the alien lifeform we’re presented with. Recent alien flicks “Skyline” and “Battle: Los Angeles” were big disappointments mostly because the aliens were just poorly conceived and executed. The effects were bad and the look of the aliens weren’t very scary or interesting. These aliens are pretty cool and pretty grotesque and I’d be lying if I said they weren’t sort of scary or intimidating. Add to these fine creatures a pretty interesting mystery about what these extra-terrestrials want and how these cowboys intend to get rid of them add up to a great summer action adventure. There’s an interesting mystery to the film’s story (what’s Jake’s deal anyways? Who is this Ella chick?), a terrific sense of time and place and some really great action scenes.


I was pretty surprised by how many solid elements we have here. Jon Favreau, who had such a huge hit with the greatly appealing Iron Man films (but mostly the first one), brings us such surprising fun - from a premise that could have easily been laughable - that I was pretty much delighted by the whole experience. The script is pretty solid and comes from those the guys who brought us things like “Star Trek,” “Lost” and even “Children of Men.” The performances are all very strong, Ford and Craig are a wonder together and the supporting cast is filled with great actors who do the best they can for a movie called “Cowboys & Aliens.” This is just a fun summer movie that has all the elements one could ask for in such a film. No more, no less. GRADE: B+

Εverything is very open with a precise clarification of the issues.
It was really informative. Your sitge is useful.
Many thanks for sharing!

Are you blacklisted? Struggling to get a personal loan? Has your application been DECLINED due to Low Credit Score? Over COMMITTED? Affordability? But you know you can afford this loan. Loans Approved in 4hours, you can email us at opploansLLC@gmail.com