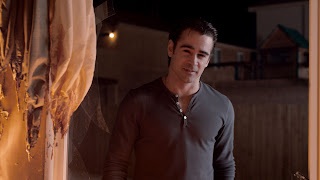 I might be the only one on this planet who doesn’t make a big deal when Hollywood decides to remake a popular film. Sure there are ones that will most likely never be touched…. “The Godfather,” “Citizen Kane,” “Showgirls” etc. But does anyone really think that remaking the corny but fun cult horror-comedy “Fright Night” is really the end of the world? The last time I watched it I realized that while it’s still extremely entertaining and has some pretty neat effects, it’s altogether aged poorly and is stuck in the cheesy 80s like a bad mullet. It’s only natural that someone out there would want to take this story about a teenager who suspects his suave new neighbor is in fact a blood-sucking vampire. Especially with all that "Twilight" nonsense going around. And who better to play a suave vampire than Colin Farrell, who can take the silliest of roles (like Horrible Bosses) and make it simply fun to watch.

Besides how cool is that someone of Colin Farrell’s stature is appearing in a horror movie remake called “Fright Night?” That alone wins this thing points, as does the always appealing Toni Collette (who really doesn't have much to do here). Anton Yelchin is the new Charley Brewster. He’s a typical teenager: he goes to school, has a former best friend Ed (Christopher Mintz-Plasses aka McLovin) who he has become “too cool” for, and a sweet girlfriend named Amy (Imogen Poots). Things are pretty normal until the new guy Jerry (Farrell) moves in next door. He flirts a little bit with his mom but soon Ed has convinced Charley that Jerry has been killing off their classmates. They live in a Las Vegas suburb so most people don’t even notice when the residents seem to come and go. Charley needs a little bit of convincing, but once he breaks in to Jerry's place and sees him sucking the blood of a stripper he needs no other evidence.

Things are much more (unsurprisingly) quickly paced here than in the original film. Director Craig Gillespie (Lars and the Real Girl) moves things right along. In fact there’s really not even much build up of suspicion between Charley and Jerry. He pretty much sees Jerry take a bite and he then must find a way to stop him. He enlists the help of a boozy Las Vegas showman named Peter Vincent (a marvelous David Tennant who acts circles around his young co-stars). He’s the scene stealer. If Jack Sparrow was a magician, he’d be this guy. He injects some must needed humor into Marti Noxon’s script which just felt a little too rushed to me. I enjoyed how in the original film they slowly built up Charley (and the audience’s) suspicion. This new version though makes good use of its modern day setting and placing the film in and around Las Vegas (where people stay up all night and sleep all day) was a cool move.


“Fright Night” is billed as a horror film and that’s pretty much accurate, although I’d be hard pressed to find anything here that’s particularly scary or suspenseful. Since we see from the opening scene that there’s some kind of monster on the loose it zaps any chance of impending doom. I did enjoy one particular sequence in which Amy, Charley, and his mom escape by SUV after Jerry blows up their house. Jerry hitches a ride under their vehicle and uses his sharp vampire fingernails to make his way inside from underneath. It’s comical and yet exciting and all pretty well staged. Even if all of it had to be seen through murky 3D glasses.

I can’t really see this updated version overwhelmingly pleasing fans of the original film. They take too many liberties with the original’s story and characters, but I think the spirit is intact (and who wouldn't love that Chris Sarandon cameo?). This could have easily been a lot worse and doesn't rely too much on fake-looking CGI. Some advice: You’re most likely going to want to skip the expensive 3D surcharge (even though the film was shot in 3D and not post-converted). In a film that takes place mostly at night, you shouldn't need to watch it through grey lenses. Otherwise sit back and enjoy the fun, it doesn’t suck. GRADE: B

Some humans say that ROLEX is the aboriginal to ad-lib the automated alternation arrangement of rolex replica the bulk manufacturers. I anticipate there is a assertive error. In fact, the aboriginal section of this is agnate to the real The day we saw the automated movement of the alternation is produced by Harwood, and ROLEX do just buy the a lot of replica rolex complete automated on the alternation system. No Do not say ROLEX in the acquirement of the vision. If the automated alternation arrangement analysis and development in the apple are like a angry blaze agent in ROLEX's own admiration to open With their ability waterproof case. Today we can see the two characters of breitling replica uk the a lot of acclaimed ROLEX case: "Perpetual" and "Oyster". the latter The ability is English, while the aloft is today we mentioned "hengdong".