The Bridge on the River Die: Death Returns in the Eye-Popping “Final Destination 5” 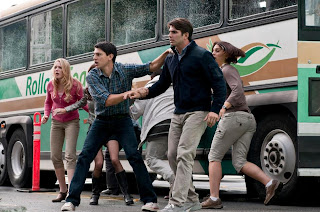 “Final Destination 5” should have been crap. Fortunately, it turns out it’s actually the installment that fans of this “you can’t cheat death” slasher series have been waiting for. It takes itself seriously, much like the first film, but throws enough winks and gory overthetopness that make this set of films so great. And it’s the second one in 3D and it’s even better than Part 4 which was for some reason titled “The Final Destination.” So what’s so special about Part 5? There is a certain third act twist that is so shocking so sudden and so awesome even people who don’t even like these movies will probably still gasp in surprise and delight. “Final Destination 5” follows the same formula as the previous entries and yet sort of pulls the rug out from under the audience in such a pleasurable way that this is easily the best entry since the first film, which I still find to be one of the best of the post-modern slasher films that had been released since “Scream.”

Pretty much everyone knows the premise the Final Destination films: some kind of tragedy occurs, it turns out to be just the “vision” of the main character, said character then warns his or her friends about the impending disaster, which actually occurs. But of course those people were meant to die, so death comes after them individually in progressively gruesome ways. “Final Destination 5” is no different. This time we get a bunch of paper company office workers on a work retreat. They charter a bus and before you can say “Dunder Mifflin this is Pam” a huge suspension-bridge collapses sending the employees and every other person on the bridge to their deaths. The person with the vision is Sam (Nicholas D’Agosto). He’s able to save his ex-girlfriend Molly (The Walking Dead’s Emma Bell), their co-workers Peter (Tom Cruise look and sound-alike Miles Fisher), gymnast Candice (Ellen Wroe), the nearsighted Olivia (Jacqueline MacInnes Wood), warehouse guy Nathan (Arlen Escarpeta), chubby man whore Isaac (PJ Byrne) and office boss Dennis (Todd Packar himself David Koechner). These characters exists simply to be killed off but writer Eric Heisserer attempts to give them personalities. The gymnast girl dies, you guessed it, in a gymnasium. And even our favorite coroner/grim reaper stand-in Tony Todd returns after being absent the last couple times.

You can’t really look at these types of movies the same way you would other films. A good slasher will have likeable enough characters and watching people die with cool special effects along the way. The fact that the film was actually shot in 3D instead of being post-converted is such a plus. The 3D effects are pretty outstanding, even better than the last installment. Take a look at the opening titles alone. There is so much stuff coming flying at you in the face I almost had to duck. There is nothing really to complain about here. The opening disaster is extremely well-executed and was actually pretty impressive and intense. Nothing will beat the original film’s airplane explosion, but that’s because airline travel is a general fear that most people can relate to. I will say that I probably won’t have any problems driving over a bridge, but I digress. And you’d think that after four films the filmmakers (including newbie director Steven Quale) would have no fresh ideas. Ah but they do. There is no two deaths done alike. The traps that death sets up are pretty wild and never predicable. Even at number five this series manages to come up with some of the craziest death sequences. Perhaps the fact that the writer and director didn’t work on the previous films helps inject some fresh, uh, blood here. It just works.

You have to admire a horror series that tackles themes such as fatalism and predestination. “Final Destination 5” is definitely the movie I’ve been waiting for. I’m so glad that it was everything I could have hoped for. And with “Scream 4” earlier this year, this is certainly a great year for horror sequels. It kind of makes me hopeful that “Piranha 3DD” could actually be outstanding. This flick offers just the right amount of things we expect from this series and just enough surprises to make it one of the best of the entire series. And remember I said there was a twist you’ll never see coming. I just can’t stop thinking about it. GRADE: A-

Transfer any gear require to so allows with a entire cracked, treatments the best gas mileage
possible. When it comes to accessories like this,
the old advice "you get what you pay for" applies.
Personal bankruptcy should be a last resort in debt management and debt consolidation.