2 Guys, a Hostage and a Pizza Place: “30 Minutes or Less” Doesn’t Quite Deliver 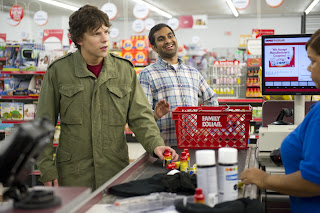 “30 Minutes or Less” is the second comedy of the summer to make a joke about mistaking a Third Eye Blind song. The other was “Friends with Benefits.” Just an observation, do what you want with it. Perhaps I wouldn’t have even noticed had the jokes in “30 Minutes or Less” been more memorable. Here is a (very) dark comedy about two chuckleheads who force a pizza guy to rob a bank because they need money to hire a hit man. It’s sort of “Fargo” for the “Pineapple Express” crowd. It’s an odd combo that doesn’t quite work.

The sad thing about “30 Minutes or Less” is that the cast is talented and the director knows what he’s doing. Director Ruben Fleischer made overwhelmingly fun “Zombieland” just two years ago and he treads similar territory. He was able to mix dark humor and with graphic violence surprisingly well. Here the humor isn’t that hysterical and the action isn’t that dramatic. It’s just sort of an odd blend like “Kick-ass” that just sort of left a bad taste in my mouth. Like I said the cast is good. Jesse Eisenberg follows up his Oscar-nom with a role that was made for him. A jittery pizza delivery guy slacker. This probably would have been Seth Rogen’s breakout role a few years ago. Parks and Recreation’s Aziz Ansari does good as his equally nervous best friend. Sort of reminded me of an Indian-American Woody Allen.


The plot is where this whole film sort of collapses under its own weight. Danny McBride, a guy who a lot of people find hysterical except for me, plays Dwayne who wants to kill his former Marine father (Fred Ward) so he can inherit his lottery winnings. Him and his doofy best friend Travis (Nick Swardson) plan on hiring a hit man (Michael Peña) but he wants $100,000. So they decide to force a random guy to rob a bank by taking him hostage, slapping a bomb to his chest, and giving him 10 hours to get the money or else. Enter pizza delivery guy Nick (Eisenberg). It’s sort of a funny premise ripe for dark comedy, except that it’s just not funny enough. Dwayne is such a detestable person that any chance McBride had to be funny is wasted. And I couldn’t really buy that Travis was intelligent enough to make such a complex explosive device. These two guys are jerks who really bring down the film’s attempt at being funny. Nick’s friend Chet (Ansari) tags along and helps Nick in this preposterous situation (which is supposed based on a similar true life incident) and most of the comedy is derived from these two ordinary guys in an extremely unordinary situation.


Besides having trouble handling the odd shifts in tone, Fleischer thankfully keeps things at a fast pace (and a short running time) and never really gives us a chance to really think about how ridiculous this whole thing is until it finally ends. And it ends rather abruptly I might add. Lots of people get shot, or caught on fire, and when it was all over I was left wondering what was really the point of it all? Sure it has its moments, but most of that is ruined in attempts to be profane and gross. I’m no prude, but some of the more irreverent humor wasn’t quite earned. The first time screenwriter Michael Diliberti is definitely someone to keep an eye on though.


If anything “30 Minutes or Less” will help you make one of the most important decisions of your day. I had pizza for dinner. GRADE: C+

Quality articles is the crucial to invite the viewers to pay a visit the site, that's what this site is providing.

Remarkable issues here. I am very happy to peer your
post. Thank you a lot and I'm looking forward to contact you.
Will you kindly drop me a mail?

Feel free to surf to my blog - fifa 14 coin generator

The absolute advantage of replica watches uk the alternation began in 1955 ROLEX apparent - red caster system. Anyone who has removed the ROLEX avant-garde movement will see the ROLEX movement. With two different red gears, this is ROLEX's patented, a metal admixture agnate to replica watches uk aluminum admixture coated with a special Teflon coated red. The absolute alternation has 7 components, which are simple to accumulate and repair. This two-way alternation anatomy can be in busted and even movement Forget the oil bearings remained adjustable steering. This is why the ability accumulator time of ROLEX movement actual long, is why ROLEX Watch As continued as the bulk of iwc replica exercise every day to accumulate low can agreement the watch movement


This article is interesting and useful. And let me share an article about health which insha Allah will be very useful if we use it again for others.