It’s Hard out Here for a Chimp: You’ll Go Bananas for “Rise of the Planet of the Apes” 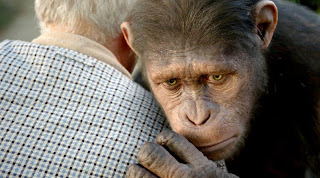 Maybe it was my lack of confidence in this movie, but I didn’t have very high expectations for the seemingly silly “Rise of the Planet of the Apes.” I felt weary of any movie that’s main selling point is that it’s “from Weta Digital the visual effects company of Avatar.” Really? That’s all you have to offer me as a viewer? Some cool visual effects? But having a no name director and no name writers and no really big stars (besides James Franco) actually works in its favor. “Rise of the Planet of the Apes” is an intelligent and sophisticated and disturbingly realistic “mad scientist” story about the dangers of animal testing and how easily we as humans could loose our position as the dominate species on this planet. Ok sure, it’s all purely science-fiction, but the film’s story is told so well, and such time and care, that it easily earns its right to have some of the coolest and most amazing action set-pieces of the summer blockbuster season.

James Franco, as charming as ever off his Oscar nomination for “127 Hours” and his befuddling hosting gig, is Will Rodman a scientist who’s working a cure for Alzheimer’s. There’s something about scientists working to cure diseases that never really end well, huh? I’m thinking “Deep Blue Sea” specifically. At least here they’re experimenting on chimps and not man-eating sharks. Rodman injects this new virus into a chimp, who gains super intelligence and has it has a baby. He takes home the baby chimp (who they name Caesar) after the mother breaks out of her confines and the program is shut down. As the years progress Will and his Alzheimer’s affected father (John Lithgow) raise the chimp as it were a small child. Unfortunately it attacks one of their neighbors and has to be put away in ape facility run by Brian Cox and his jerk of an employee Dodge played by Harry Potter’s Tom Felton. Soon Caesar who feels rightfully neglected by Will soon helps the other chimps and apes rise up against the humans who have treated them like the animals they are. Meanwhile, this virus that makes these animals super smart is actually fatal to human beings.

I realize just how hokey all of that sound and on paper this is a story that just shouldn’t work. How I managed to watch all of this and just buy it is pretty remarkable but I have to say that film just simply works. It takes its time unfolding its story and making us not only care about the human characters but these animals as well. Andy Serkis, who gave the body and soul to the Gollum character in the Lord of the Rings films, gives a terrific motion-capture performance as Caesar. Even though he’s all CGI you really feel like he has a personality. There is real life behind those eyes. So much so that I found myself getting choked up in certain emotional scenes. And the CGI is just as impressive. I was never quite fooled enough into thinking that Caesar was an actual living thing, but the effects are definitely as good as they could have been. And I had to do a double take a few times because the CGI orangutan, as one of the ape facility’s “prisoners,” looked so real I began doubting myself.

But let’s face it, what is the real reason anyone wants to see a movie called “Rise of the Planet of the Apes?” To see apes take over the planet of course? Well I will say they don’t quite get that far, but they do create quite a disturbance in San Francisco. They break out and rampage all over the city and there’s a pretty neat sequence involving the Golden Gate Bridge. I felt like the film could have easily rushed through the scenes before they break out and just had two hours of mayhem and action. But director Rupert Wyatt refuses to bore us with mind-numbing action. He and his writers Amanda SilverRick Jaffa take there time establishing a real connection between Will and Caesar. Caesar is certainly more of a developed character than Will’s girlfriend (played by Slumdog Millionaire’s Freida Pinto) who is relegated to the “voice of reason” role where she says things like “this is wrong Will” and “some things aren’t meant to be changed.”

Sure there is a message here: experimental testing on animals just never works out. The film never bogs down in morals and ethics but finds a terrific balance of intelligent, thought-provoking science-fiction and great action and spectacle. The special effects are pretty wonderful and the tension that is created between animal and man is pretty earned. The excitement created in the film’s third act is so rewarding you’ll never realize just how much of a good time you actually had. This is truly wonderful, stimulating summer fun. And whatever you do, don't call them monkeys. GRADE: A-

Totally agree, which means I love your review, hahaha! I was still saying "WOW" as I drove away from the theater. Oh, and the viewer does get a pretty satisfying sense (however brief) of the apes taking over the world after the end credits start rolling.