Holmes Sweet Holmes: Things Go Bump in the Night in “Don’t Be Afraid of the Dark” 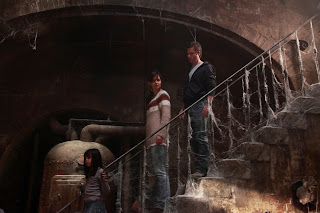 Another weekend, another remake. If there’s anything to be said about Hollywood at least they’re consistent. Now they’re remaking TV movies… but you won’t see a middle aged woman dying of cancer or fighting back against a sexually harassing employer in “Don’t Be Afraid of the Dark.” It’s a creepy creature feature based on a telefilm you probably haven’t heard of unless you were born way before the Nixon Administration. Guillermo del Toro who gave us the creepy but beautiful Pan’s Labyrinth produces and co-writes this new flick about evil little creatures who terrorize Guy Pearce, his young daughter and his girlfriend Katie Holmes.

“Don’t Be Afraid of the Dark” is an interesting take on the “haunted house thriller” in which people move into a new house and then proceed to be terrorized by unexplained beings. Except this time the beings aren’t ghosts, they’re creature demons! They sort of reminded me of something from The Gate? Remember that one with little Stephen Dorff? That flick could certainly use an update. Guy Pearce plays Alex who works on restoring old mansions. He’s trying to get on the cover of Architect’s Digest even if it means ignoring the painfully disturbing cries of his medicated daughter Sally (Bailee Madison). Sally has sort of been dumped on him by his ex-wife. Neither of Sally’s parents seem like responsible parents. At least there is Alex’s girlfriend Kim (a disturbingly decent Katie Holmes) who Sally acts cold too, but gradually warms up to. Sally spends most of the time moping around the house trying to find something to occupy her time in this gigantic mansion.


Ok so let’s talk about the mansion. I don’t know what person in their right mind would want to stay overnight in this place, let alone hang out there during the day. It’s eerie beyond belief. Let’s thank the wonderful work of the production designer because the mansion is definitely one of the most well defined characters in the film. Alex learns there’s a sealed off basement to the house, which he decides to uncover which is never a good idea. Soon Sally is hearing voices from the basement. Someone wants to be her friend and the kid is so lonely that I’d probably try to make friends with the scary voices in the basement too. We learn the voices belong to miniature demon-like creatures who like feeding on human teeth and enjoy poking at people with pointy objects. They certainly do a number on the bearded caretaker who seems to know a lot more about this place than anyone else.


A majority of the film is spent with Sally trying to figure out what these voices are and once she realizes they are not exactly friendly, she can’t convince her dad or Kim that there’s actually something pretty dangerous going on. Alex just thinks she’s upset (and she is because of a serious lack of decent parenting I’d say) and she has every right to be because demon creatures want to eat her. Apparently Kim comes from a troubled past, which we don’t really learn anything about, so she quickly relates to Sally and begins to investigate. This leads her to discover the mystery of why uncovering that sealed basement was the worst idea in the history of worst ideas.


The film is directed by first time filmmaker Troy Nixey and what an impressive debut it is. He employs the Jaws method and refuses to show us anything up close too soon and lets the creatures be revealed when the time is right. Although del Toro and Matthew Robbins’ script could have used a little more about these creatures. I felt there were too many unanswered questions about them. We spend so much time with Sally that I sort of wished we could see what these demons were all about. But there is so much wonderful gothic imagery and the film is punctuated with disturbing R-rated content (and nary a curse word or naked body part to be found). You have to just respect the fact that it feels like the filmmakers were making something fun and stylish and not just attempting to steal the money from your wallet. I liked the performances even if I didn’t always admire their characters actions. “Don’t Be Afraid of the Dark” isn’t the scariest movie by a long shot, but it’ll at least give you the willies and in this day and age you can’t quite ask for more than that. GRADE: B

Very nice post. I just stumbled upon your weblog and wished to mention that
I have truly enjoyed surfing around your weblog posts.
In any case I will be subscribing on your rss feed and I am hoping you write
once more very soon!