High Pretension: “The Tree of Life” is an Equally Frustrating yet Beautiful Sprawling Epic 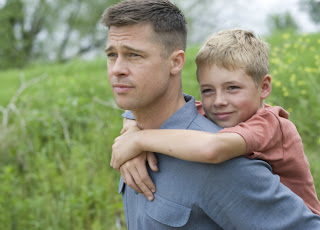 “The Tree of Life” is probably one of the most confusing, audacious, frustrating, strange, beautiful, tedious, fascinating and pretentious movies I’ve ever seen. It’s a 138 minute experimental art film with big stars (Brad Pitt and Sean Penn) with some of the neatest surrealist imagery I’ve ever seen. It’s unexciting and yet fascination all at once; it will test your time and patience but it will also test your ability to think and ponder about things way behind your comprehension. It’s a movie you have to be in the right mood for. I definitely think it’s the type of movie that Stanley Kubrick would make if he were alive today. The imagery is beautiful and there’s hardly any dialogue. This is a movie that’s really hard to recommend but I suggest sitting through it just to see it for yourself.

Terrence Malick is a pretty interesting filmmaking. Not just because his movies themselves are interesting (like Badlands or The New World) but because he’s interesting himself. A known anti-Hollywood recluse the guy has made only five films in about forty years. He took a twenty year hiatus after Days of Heaven before coming back with the Oscar-nominated “The Thing Red Line.” He turned the Pocahontas story into a beautiful and meditative nature film with “The New World” six years ago, and now he returns with his most bold work yet, “The Tree of Life.” A ponderous, meditative, work of art is a visual fest for the eyes and a test of patience for the easily bored. I was kind of one of them. The film takes a nearly forty minute detour to show us how the entire universe expanded and formed. We see earth come together and then life appears and evolves into fish and then reptiles. Look there are dinosaurs in a Terrence Malick movie! And then an asteroid ruins it all and helps humans show up. The whole sequence sort of works as an entire prequel to the opening of “2001 A Space Odyssey.” It was fascinating (with great effects work by Douglas Trumbull) to watch and you always wonder, why are we seeing this? Beats the hell outta me.

The movie is called “the Tree of Life” of course, so I guess it seems appropriate for us to witness how life first formed on our planet and how it relates to the human story we’re watching. The unconventional narrative begins with the O’Brian family in Texas circa the 1950s. Father is a stern Brad Pitt and Mother is a loving Jessica Chastain. They have three boys. We get to know most about Jack (who is played as an adult by Sean Penn). We see Jack as a baby and then the film begins to finally focus on the beginning of his adolescence (where he’s played by Hunter McCracken). We learn early in the film that one of the brothers has died at age 19 (perhaps in the war) and I take a majority of the film to be Adult Jack’s memories. Most of the time what we see is his summers spent playing and roughhousing. Eating dinner with his family, getting yelled at by his dad and given hugs and tickled by his mom. He becomes rebellious. Almost thinks about hurting his dad. We see the almost mundane lives of these characters but shot through the almost too beautiful and vivid to be true work of cinematographer Emmanuel Lubezki. The film was written by Malick but there’s hardly any words spoken; this is truly a film where the images tell the story. Meaning is achieved through its editing and visuals; this is a film professor’s dream come true.

“The Tree of Life” is a movie that can easily be found annoying while watching it because you just want to scream at the screen and shout “Oh my God what the heck is going on in this movie?!” But I refrained because it was so sort of captivating. It’s a movie that is probably more fun to discuss than to actually watch, like Hitchcock’s “Vertigo” or “2001.” You have to equally admire Malick for making a movie like this and yet you want to slap the pretentiousness out of him. This is a story about life and while we’re all here as told through the lives of this family. I’m not quite sure I really get any of it, but if you want to be intrigued by the strangeness of it all - and the undeniable cinematic artistry - you should check it out. GRADE: B

Thanks for the review, Chris. I heard that theaters nationwide (during its limited release) experienced a wave of unsatisfied viewers walking out of the movie, and even angry viewers demanding their money back. This makes the movie all that much more intriguing to me, lol. I'll put it on my list!

Yeah I agree that hearing so many extreme critisims made it pretty intriguing. let me know if you end up seeing it!

It was really weird, but in a good way. However, i dont recommend watching this without the subtitles on, you'll miss a lot if you don't.