Sigh, Robot: Those Pesky Alien Robots Return in “Transformers: Dark of the Moon” 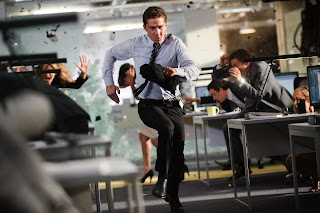 While watching “Transformers: Dark of the Moon” I became sad for two reasons. First was the thought that NASA’s space shuttle program has officially ended. It’ll be sad knowing that there won’t be any man-led space shuttle missions to the moon. After all, we haven’t been there in years and why should we? We have robots and cameras that can do the dangerous stuff for us. The second reason I became sad is because it became abundantly clear that there will never be another great Transformers movie (hey, I enjoyed the first one). I figured with the hopeless trainwreck that was “Revenge of the Fallen” that things couldn’t get much worse. Sure this third entry isn’t quite as bad as number two (hmm how appropriate) but it’s not really that much of a marked improvement. It’s still loud, noisy and much too long.

What can I say about director Michael Bay that hasn’t already been said before? Some will outright call him a hack or a jerk. Maybe he is. He makes beautiful, colorful stylish movies. His movies never look ugly or boring. But of course he can’t really quite grasp the concept of a good story, although he came pretty close with the unfortunate 2005 flop “The Island.” The first Transformers movie worked because Shia LaBeouf’s character was charming and it was fun seeing his first interactions with the alien robot race known as the Autobots (the good guys). The Autobots were nearly defeated in a war against the Decepticons (the bad guys). The funny, delightful and exciting parts of the original film became loud and obnoxious in the second one with a plot that even a rocket scientist would have trouble following. There’s more of the same here.

The film opens with a neat sequence in which we learn the Apollo 11 moon mission was in fact a mission to explore an alien spacecraft that landed on the dark side of the moon. But that cool concept is quickly dropped and is replaced by confusing action and inane dialogue from usually very appealing actors. Oscar/Tony winner Francis McDormand shows up looking quite embarrassed but no one should be as embarrassed as John Malkovich who hams things up rather disturbingly. Sam Witwicky (LaBeouf) has a new girlfriend now and this time not only is she a model-look-a-like hot chick but she’s in fact a model (Rosie Huntington-Whiteley)! She’s bland yeah, - dare I say robotic - but at least I believed her in the role. Although I’m not sure what someone who looks like that would find interesting in Sam Witwicky. Sam is jealous of Dylan (McDreamy himself Patrick Dempsey) who turns out to be more like McDickhead. He in fact is helping the evil robots take over the planet. For some stupid reason I don’t feel like giving further detail, I was bored, why should you be bored? Cue lots of robot battles that at least look pretty cool in 3D (I thought the 3D was a mild upgrade and wasn’t nearly as annoying as it could have been).

In this two hour and forty minute barrage on the senses (although things are toned down slightly for the 3D would be too much to handle with Bay’s erratic camerawork, which is only somewhat erratic instead of full-on erratic) there are two things I actually enjoyed. One is the new Decepticon known as “Shockwave” which is a long tentacled robot that dives in and out of the ground or building or whatever structure it wants to completely obliterate. Shockwave is involved in a sequence in which our hapless human characters are trapped in a tall Chicago skyscraper in which they would most likely died at least 10 times but barely make it out with a twisted ankle. Unfortunately that’s about it because the movie goes from boring to almost tedious by the two hour mark in which the movie turns into “Battle: Chicago.” And secondly, I loved the film's opening scenes integrating actual footage with stuff that is Hollywood fantasy. And as a side note, I still don’t quite get how the Transformers, in robot form, are scratched and mangled looking, but when they transform into good-looking product placement automobiles there’s nary a scratch to be found.

I always thought the first Transformers, while not a great movie by any means, was at least entertaining enough to hold my attention and be rewatchable. It had enough charm and personality to keep it afloat. Here, like the second film, there is just too much unnecessary and confusing plot details to cover up the fact that really not much is actually going on. It sort of wastes a cool moon landing concept and instead would rather hit you over the head with lots of noise and boring (and sometimes just extremely bizarre: Ken Jeong). Overall it’s a slight step up from “Revenge of the Fallen” but it still has a way to go if it’s going to get my but in the theater for Part 4. GRADE: C-

Heya i am for the first time here. I found this board and I
find It truly useful & it helped me out a lot. I hope to give something back and
aid others like you helped me.