Firing on No Cylinders: Pixar Should Have Put the Brakes on “Cars 2” 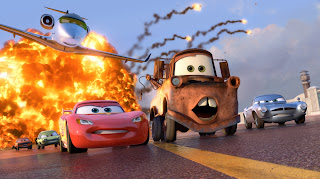 There are several things that came to mind while watching Pixar’s 12th feature length film “Cars 2.” Why does this exist? Will Pixar finally lose the Best Animated Film Oscar? Will there not be an animated film nominated for Best Picture? And why do sidewalks exist in a world that is only inhabited by cars (and other vehicles such as airplanes and boats)? Anyone who hated the first Cars movie, and yes there are plenty of you out there will be quite a shock if you plan on seeing the critically panned “Cars 2.” Sure it features stunning animation, but the film feels like it has no reason to exist and probably would have been better left as a direct-to-DVD cash grab for Disney.

I remember critics calling the first Cars movie mechanical and soulless. It never achieved the emotional level as the other Pixar films. They thought it was loud and obnoxious. I disagreed. I thought the animation was simply outstanding. Drool inducing actually. And it was a pretty darn hilarious movie if you ask me. The car puns were pretty clever. The filmmakers did such a great job of making things we would never see as human-like (motor vehicles) and making them completely engaging and humanistic. I was completely surprised at the level of fascination I found with the original film and even though some saw it as a rip-off of “Doc Hollywood” I didn’t care because I’ve never even seen that movie. But now we have “Cars 2” which like the first Transformers sequel follows the formula of “bigger and louder is better.”

The film opens with an spy thriller action sequence set on a ship out in the middle of the ocean. Immediately I don’t care what’s going on. I just want to see the adorable characters from Radiator Springs that I fell in love with five years ago. We finally get back there and see our old friends Mater, Lightening McQueen, Sally and the rest of the gang. It appears that Sally and Lightening have been dating and Mater and Lightening are still best friends. But of course like all situations like this, Mater always feels left out. But even mechanical objects like cars realize that it’s just as important to spend time with your best friend as it is with your significant other. That’s why Pixar is so great, they disturbingly make their films so true to life. The plot here has something to do with Lightening shipping off to Japan to complete in the “World Grand Prix” and Mater and some of the others join him. Before Mater can say “two left lug nuts” he’s being mistaken for a spy and becomes involved in international espionage. Brits Michael Caine and Emily Mortimer provide voices for new British car characters. But they never achieve the great character development as our friends back in Radiator Springs and the more the film spends in Europe the more I longed to head back to that quiet little town that was the setting for the first film.

Poor director John Lasseter. I think this guy is literally destined to never win a completive Oscar for Best Animated Feature. Every time a brilliant new Pixar film is released he’s not the director and when he is (like with Cars) stupid movies about dancing penguins tend to win (He did win an Oscar for his short film “Tin Toy” back in the 80s). Mr. Lasseter, who gave such heart to his previous films, has made “Cars 2” a loud and crass and borderline obnoxious movie (but let’s also credit co-director Brad Lewis for this mess). The emphasis here is on explosions and killing automobiles in various action sequences. It sort of reminded me of “The Incredibles” another loud Pixar film I wasn’t too particularly fond of. And if you hated the car puns in the first film, you’ll hate them here as well. One scene takes place inside “Big Bentley” in London. I did enjoy most of the Japan sequence, but I think making fun of Japanese culture is way too easy a target.

I’m actually not that disappointed by “Cars 2” and that’s because I had such low expectations that it wasn’t even really all that bad. Maybe it’s really not all that bad, perhaps I was just tired or not in the right mood to see this thing. But I still can’t help trying to figure out what really went wrong here. Even though the first “Cars” is one of my all-time favorites, I never needed to see a sequel. “Cars 2” exists to sell toys and ironically the Toy Story movies, which are all about toys, seem to be the franchise with the heart and emotion too good to just be about merchandising. Pardon the pun, but this noisy and overlong movie just left me exhausted. GRADE: C-

There are certain sites that also take a step further and match
you up with people that would be good fit for you, based on the personality profiles.
But there are ways to flirt effectively online while still creating the right impression for your prospective
date while you're chatting online. The model plays a vital role for
his registered user and perform a sexy, hotty and enjoyable show
before the user.

I am really happy to read this blog posts which includes plenty of valuable information,
thanks for providing these kinds of statistics.

Feel free to visit my page After Effects Wave Effect