French Kiss: “Midnight in Paris” is Decent Enough, but Not Allen’s Best 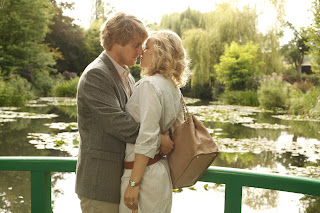 Woody Allen’s “Midnight in Paris” is sure to be well loved... by English majors. The film contains a big secret that isn’t really shown in the trailer but in order to even review this movie it has to be said. Owen Wilson is a screenwriter hanging out with his fiancée (Rachel McAdams who is disturbingly unlovable but that’s on purpose) and her family. He’s writing a novel and dreams of being taken seriously as an author rather than just polishing up Hollywood screenplays. So he spends his evenings in Paris, starting at the stroke of midnight of course, being send back in time to the 1920s where he rubs elbows with the literary and artistic elite. This includes everyone from F. Scott Fitzgerald and Ernest Hemingway to Gertrude Stein and Pablo Picasso. A lot of these roles are filled by famous people and some aren’t. Some of them are funny and some of them try to be. Overall, I enjoyed “Midnight in Paris” but since it’s been so long since English and History class I’m afraid some of the jokes may have been lost on me.

Woody Allen has always loved referencing things that go completely over my head. I don’t get half of the references in “Love and Death” for instance, but like Airplane, there are so many gags and jokes that even if you don’t understand one you’ll probably get the next one. Even Annie Hall makes references to people who I know nothing about. Take the famous scene in which Allen and Annie are waiting in line at the movies and Allen has to take Marshall McLuhan aside to prove that the annoying guy in front of him in line is actually a pretentious jerk. You don’t even have to have heard of this guy to really get what was going on. It just worked. So many references to the writers and artists in “Midnight in Paris” fell a little flat for me but the old people in the audience were at least getting a kick out of it.

I think the thing I miss most about this movie, and most of Allen’s recent films, is Allen himself. I love Woody Allen’s work as an actor. Even if he sort of plays the same type of character in all his movies (the neurotic) there’s a reason why: he’s good at it! Owen Wilson (as Gil) does make a decent Allen replacement and it’s probably one of his strongest performances. I was a little disappointed that McAdams who is always charming and enjoyable was sort of related to the “pesky girlfriend” role. She spends most of the time without much to do except go sightseeing and shopping with her rich parents and her rich friends. Allen has always loved giving us highly aristocratic characters who enjoy art and culture and wine and “Midnight in Paris” is no exception. Other notables are Kathy Bates, Adrian Brody and Allison Pill who all play real life people. They’re all very good, but none have the typical flashy Woody Allen supporting role. I can’t imagine anyone getting Oscar consideration, although Allen’s script is definitely original and witty enough to be considered.

“Midnight in Paris” is certainly an easy movie to like and I enjoyed it for what it was. It’s sort of funny how Allen has been relegated to making films in Europe because it seems American audiences just don’t get him anymore. I think his film ”Hollywood Ending” where he plays a director who makes a big bomb that’s hated in the US but a hit in France was sort of foreseeing things to come. Up next on Allen’s European tour is Italy where he is thankfully returning in front of the camera for the first time since the hilarious “Scoop.” “Midnight in Paris” is unmistakably Woody Allen through and through but hopefully his next movie will be great and not just good. GRADE: B-