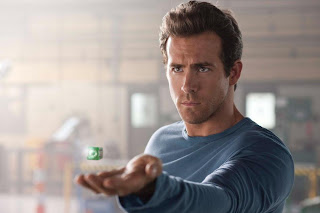 I don’t know what on during half of “Green Lantern.” And that was because I was so tired that I had my eyes closed and was half way to sleepy land while watching it. I found the loud action scenes to be particularly enjoyable for a nap because they were so dull and boring they made the quiet dialogue scenes look amazing. Therefore I can’t really present an actual review of “Green Lantern” so since I didn’t’ actually watch the whole thing, I can’t write a whole review. Let’ see what I can remember.

The whole opening of the film sets up the movie’s utterly stupid and ridiculous storyline. It has something to do with aliens who love the color green because it makes hem powerful or something. They harness this green light as energy and use it to stop evil. I hate when comic movies have to spend ten minutes using voiceover explaining how everything in this fantastical world works. Sure movies like “Star Wars” had the necessary intro “crawls” but those were like 2 minutes long. Any movie that completely confuses its audience in the first ten minutes by blabbing on about things we don’t care about is just silly (I’m looking at you “Lady in the Water”).

We’re finally introduced to Hal Jordan (Ryan Reynolds who makes the most of this crap) who is a cocky pilot. Oh and Blake Lively from TV’s Gossip Girl plays a pilot too. We’re introduced to Hal’s busy work life and family life, whom we never see again after the first 20 minutes. Some alien (that looks like a cousin of Freddy Kruger from “Wes Craven’s New Nightmare”) from the Green Lantern planet crash lands on Earth and his magical ring must select someone to take his place. He picks Hal for some reason where he’s whisked away to the planet and he dons a lame CGI green suit and he learns how to harness his new magical abilities: like using his green ring to make brick walls and giant guns as if he were Jim Carrey in “The Mask.”

Every superhero movie needs a villain and he we’re given the great Peter Sarsgaard as a doctor/scientist guy who gets infected by the dead purple alien. He gets mind powers and his head grows to the size of a mutated watermelon and he acts are crazy and evil. He even reads the mind of one of his college students and throws him across the room. Oh and Tim Robbins plays his dad. Yeah that Tim Robbins. I can’t really remember much else except I do recall opening my eyes and seeing some giant brown poop-like monster ravaging the city and the new Green Lantern must stop it.

“Green Lantern” was directed by Martin Campbell the same guy who relaunched the James Bond franchise with the successful “Casino Royale.” That movie relied heavily on jaw-dropping practical effects (parkour!) but here the emphasis is on everything cartoony. Mr. Reynolds is a charming guy and he really makes the most of what he’s given to do here, but it’s hardly enough to salvage the whole thing. Nothing here is particularly offensive, just unmemorable. This is a comic book movie that’s more in the vein of Fantastic Four: it’s strictly for the little ones. This ain’t “The Dark Knight.” All was not lost, at least I got a good nap. GRADE: C-

I am really enjoying the theme/design of your weblog. Do you ever run into any web browser compatibility problems?
A small number of my blog visitors have complained about my blog not operating correctly in Explorer but looks
great in Chrome. Do you have any ideas to help fix this issue?

Your website must supply a clear message having a goal-oriented direction, setting you
apart from your competitors. Businesses are to heavily dependant upon customers
for their survival, without customers a company would cease to exist.
it can also be employed for headhunting and employment.