Head of the Crass: Cameron Diaz is the Worst Educator in the World in “Bad Teacher” 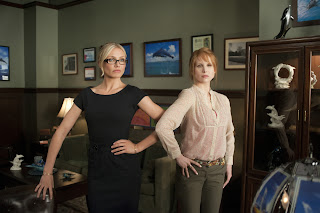 “Bad Teacher” doesn’t take place in the real world. It takes place in movie fake real world. A world where a teacher can show her middle school students movies every day (like “Stand and Deliver and the horror flick “Scream”) and not get fired. She smokes pot, she steals, she manipulates, she’s kind of whorey. Basically the last person in the world who you’d expect to be a teacher. She’s a teacher for all the wrong reasons. She just wants summers off and she figures it would be a breeze. This teacher is Elizabeth and she’s played by Cameron Diaz. The movie works because it takes place movie fake real world. Cause if it was the real world, she’d be fired (and probably not even hired in the first place) and there’d be no movie.

This is the sort of role that Cameron Diaz was born to play. Most say she’s an actress with pretty limited range and I’m inclined to agree. She’s coasted along in her career mostly on her good looks and her ability to act better than a piece of tree bark. But in the right role in the right movie she can be a wild success. Don’t believe me? Watch “There’s Something About Mary” or “In Her Shoes” and tell me I’m wrong. I think “Bad Teacher” is a good fit. The role requires her to be sexy and foul-mouthed and she’s good at that. And you don’t really have to care about her. She’s so filthy and horrible I’m surprised most people didn’t walk out of the theater. But that’s what I admire about the film – that it’s willing to place such an unlikable character at the center of its story. Although she’s not so much unlikable as she just says and does things that we all wish we could. When she finally actually starts teaching her students (because she finds out the teacher who’s class scores the highest on a statewide teast gets a bonus) she grades them with things like “are you f*cking kidding me?” and “you’re so stupid”).

The movie works because we all know teachers are supposed to be kind, understanding, smart, and kid-friendly. Elizabeth is none of those things. She spends a year as a teacher and she planned on quitting to focus on her marriage to some rich guy. But her fiancée breaks up with her (with his mother there) and she’s forced to crawl back to the school where she’s reinstated three months later. She quickly butts heads with a deliciously perky teacher Miss Squirrel (played marvelously by Lucy Punch). She’s one of those teachers who is so passionate about teaching that she freaks out even her own students. Punch is almost a comedic genius here and she makes the perfect foil to the foul-mouthed Elizabeth. The two butt heads even more when they both set their sights on a cute new permanent substitute played by Justin Timberlake. He doesn’t quite get much to do here except play against type as a prudish, slightly nerdy guy who has just gotten out of a relationship. Elizabeth seems to think a boob job will help her get this guy and sets her sights on a new pair of fake boobies.

This is a movie that is filled to the brim with wonderful and hilarious supporting performances. Phyllis from TV’s The Office shows up as a reserved teacher who has some pretty funny lines. Jason Segal plays the gym teacher who has a thing for Elizabeth, but of course she’d never date a gym teacher. Even Molly Shannon shows up as the mother of one of Elizabeth’s students who invites her over for a Christmas dinner from hell. And Christopher Guest favorite John Michael Higgens is the principle who refuses to believe that Miss Squirrel’s accusations about Elizabeth are true. Even Cam from “Modern Family” shows up in a completely against type role.

“Bad Teacher” is funny and almost perfectly blends dark humor with its innocent setting. Diaz is good here and so are her wonderful supporting players. Director Jake Kasdan (Walk Hard) moves things along swiftly and always presents us with unpredictable scenes (dry humping much?) and some seriously funny humor. Punch and Diaz work so well together I wouldn’t mind seeing them in something else together. This one certainly makes the grade. GRADE: B

Admiring the commitment you put into your website and in depth information you provide.
It's great to come across a blog every once in a while that isn't the same out of date
rehashed material. Excellent read! I've saved your site and I'm adding your RSS feeds to my Google account.

Whoa! This blog looks exactly like my old one!

It's on a totally different subject but it has pretty much the same page layout and design. Outstanding choice of colors!

Take a look at my weblog: how safe Are electronic cigarettes

I love what you guys are usually up too. This kind of clever work and
coverage! Keep up the fantastic works guys I've included you guys to my personal blogroll.

Do you have a spam issue on this blog; I also am a blogger,
and I was wanting to know your situation; we have created some nice methods and we
are looking to swap techniques with others, why not shoot me an email if interested.

Today, I went to the beach with my children. I found a sea shell and
gave it to my 4 year old daughter and said "You can hear the ocean if you put this to your ear." She put the shell
to her ear and screamed. There was a hermit crab inside and it
pinched her ear. She never wants to go back! LoL I know this is totally off
topic but I had to tell someone!

My weblog :: Methadone Clinics in PA

When I initially commented I clicked the "Notify me when new comments are added" checkbox
and now each time a comment is added I get three emails
with the same comment. Is there any way you can remove me from that service?
Thank you!

Thanks for sharing this Excellent information. I like this post.
watch latest telugu full movies online for free