Danger on a Train: “Super 8” is an Honorable Homage 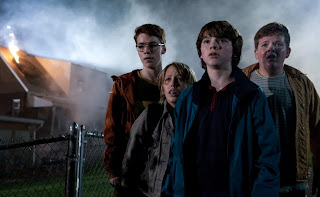 So much praise in the form of creativeness and originality has been heaped upon J.J. Abrams it’s crazy to think that “Super 8” is actually the first truly original film he’s directed. He had previously directed a sequel (the wonderful Mission: Impossible III) and then a reboot (the actually worth seeing new Star Trek). And yet even if “Super 8” is an original piece, it works as more of an homage than an actual piece of truly innovative storytelling. Since Steven Spielberg is a co-producer you can’t watch the movie without finding so many similarities with his films that it almost becomes a fun game. Spot the Spielberg reference! But Abrams passion for creative filmmaking and storytelling certainly shines through and Super 8, while not that wholly inventive or ground-breaking manages to tell a simply story and capture the audience’s imagination.

If you really wanna know that the movie is like it’s basically a weird hybrid of every early Spielberg movie meets “Cloverfield” and “The Goonies.” There are echoes of “Stand by Me” here as well. Essentially this is a monster movie told as a coming of age tale. With that in mind, it’s basically a darker version of E.T. Abrams, who also wrote the screenplay, introduces us to a bunch of young boys circa 1979. (The look and feel is pretty on but for those looking for historical inaccuracies here are a few: the Rubik’s Cube wasn’t popular until 1980 and Sony Walkmans weren’t introduced in the US until July 1980) One boy named Joe (Joel Courtney) has Disney Syndrome: he’s just lost his mother in a steel plant accident and his doesn’t have a very strong relationship with his father. He and his friends (my favorite being the pyro kid played by Ryan Lee) are all making a zombie movie using an 8mm film camera. The way these boys interact, teasing each other, and using profanity is something right out of “The Goonies.” One night while filming a scene at a train station, they witness a horrible train crash which is, so spectacularly staged that any destruction that comes afterwards just doesn’t equal up. And the boys appear to have captured something they shouldn’t have seen on that camera.

And that’s really all anyone who hasn’t seen the film already knows. The marketing of the movie, like “Cloverfield,” has relied heavily on not showing too much. We know there’s some kind of monster or creature or alien, but we don’t really know what it is. So does it live up to the hype? Yes and no. I wasn’t too shocked to find out what was in that train and neither will you. But that’s not the point. This is a movie that exists strictly to tell a wonderful story about friendship in time of a monster rampage. It doesn’t really matter what’s in that train so much how the whole thing is going to end. Some may find the ending slightly unsatisfying, but the majority of the film is so entertaining and gripping it doesn’t really matter. And as is always the case in movies like this the government guys have to swoop down and take control of the situation but they’re always just jerks who are trying to cover things up.

This is the rare summer movie that doesn’t feature big named stars and relies on lesser known performers to act out truly emotional and gripping scenes. Kyle Chandler, who is no stranger to big action movies having been in King Kong, does well here as Joe’s father Jackson. Dakota Fanning’s younger sister Elle Fanning, who probably hates being referred to as Dakota Fanning’s younger sister is really good here too as Alice who plays Joe’s love interest which causes a small rift between Joe and his friend Charles (Riley Griffiths). And the subplot about Alice’s father having something to do with Joe’s mother’s death is handled pretty well and adds to the human drama. But let’s all face facts, the reason we wanna see this movie is because of the creature stuff. There are some pretty disturbing scenes which I’m sure I’d be more afraid of if I was younger. And the film features great effects that don’t always rely too much on cartoony CGI. Whether you think the creature is actually scary and well-conceived will depend on your own personal taste.

J.J. Abrams has concocted a well told story. There’s nothing quite new and original here and if you were never a Spielberg fan then this certainly won’t convince you otherwise. In a way it’s sort of like a Quentin Tarantino movie who like Abrams is a nostalgia fan who likes making movies about the movies he’s loved. You can tell there’s a passion there to tell a unique story based on almost every other movie already made, but it’s hard not to get all wrapped up in it. GRADE: B