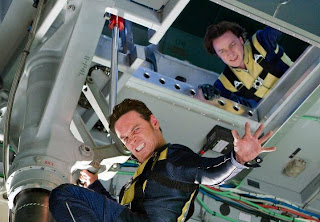 I’m pretty confident saying that the new X-Men movie is simply the best of series. It takes everything you loved about the good installments and removes everything you dislike about the bad ones. It features great performances, an engaging story, a wonderful balance of interesting characters, fantastic music and splendid special effects. The social issues are present and not shoved down your throat and the film fits pretty nicely as “part 4” in the series and fortunately pretends that “X-Men Origins: Wolverine” didn’t exist. Heck, maybe I liked this movie so much because Wolverine was just dull and laughable.

Director Matthew Vaughn, who most recently made “Kick-Ass” a movie I didn’t particularly like but he showed talent and definite potential, makes a terrific addition to this long running comic movie series about mutant human beings living amongst us normal folks. The film balances humor, drama and action expertly. The film shows us young Magneto, Erik Lehnsherr, as did the first film, in a concentration camp, whose anger reveals his ability to move metal with his mind. Here he’s forced by evil Nazi Sebastian Shaw (the always reliably evil Kevin Bacon) to harness and develop this power. This young kid eventually grows up and is played by Michael Fassbender, who was once an Inglourious Basterd. Erik meets fellow mutant Charles Xavier, who is not bald and can walk, played here by James McAvoy. The two form a friendship, but the two have very apposing views on mutants vs. humans. Erik believes in revenge and assumes humans and mutants won’t be able to live in harmony. Charles takes the MLK method striving to help mutants develop their powers and live with non-mutants in harmony.

The movie jumps around a lot in time but you never feel lost and in fact, it gives the film an almost epic feeling that the last few films never achieved. The film smartly takes place in the 1960s, around the time of the Cuban Missile Crisis, and has wonderfully enjoyable espionage spy movie feel to it. Charles and Erik meet up and set out to find other young mutants who have their own special abilities. Even though there are plenty of characters here, they all get their time to shine and never feel shoehorned in (um hello Angel from The Last Stand) and while not every character makes it to the very end, there aren’t shocking deaths like in The Last Stand that seemed there to just piss off the audience.

And what would be a great super hero comic book movie without a great villain? Shaw, who turns out is a mutant with the ability to harness energy (aka you can’t shoot him or blow him up) is Erik’s main rival and he’s intent on getting revenge. This revenge is what drives Eirk, and like Anakin Skywalker, could have been good, but would rather turn to the dark side and eventually form the Brotherhood of evil mutants. Shaw’s main henchmen include Azazel who, like Nightcrawler, can teleport. He doesn’t get much to do besides kill people. And Riptide likes making tornados. Emma Frost (a sort of bland January Jones) can read minds, like Charles, and can turn her skin into diamonds. She sort of looks like a Fembot. They are certainly a strong force against the newly formed “first class” which includes Beast, Mystique, Banshee, Havok, and Darwin, each with their own special abilities.

The filmmakers have filled this film with such fun and excited sequences, there are just too many to name specifically here. Erik is simply badass here. Since he’s so angry most of his scenes are filled with violent rage. If you don’t to see someone’s metal tooth fillings being ripped out, don’t go see this movie. “X-Men First Class” is one of the best comic book movies to come out in the past few years and can equally stand along side the likes of “Spider-man 2,” “The Dark Knight,” and “Iron Man” as wonderfully entertaining and well-made superhero flicks that will have fan boys salivating for days. GRADE: A-

hello!,I love your writing very so much! percentage we keep in touch extra about
your post on AOL? I require an expert on this space
to resolve my problem. May be that's you! Taking a look ahead to look you.

Thank you for sharing the information, may be useful :)