A Bear to Remember: “Kung Fu Panda 2” is a Fun and Worthy Sequel 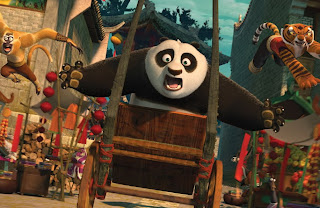 “Kung Fu Panda” was a great little movie, one that I watched for the first time only recently. And it is with that fresh viewing that I happily saw the next chapter, “Kung Fu Panda 2.” I luckily didn’t see it in 3D because let’s face it at this point, unless severed body parts (i.e. Piranha 3D) or flying banshees (i.e. Avatar) are coming at me, I will stick to two dimensions. The animation here is colorful and crisp and bright, why ruin it by putting on darkly tinted glasses that will just end up giving you a headache? There’s enough action to delight the kiddies and enough solid storytelling to entertain us adults. “Kung Fun Panda 2” may not fit the mold of solid sequels like “Toy Story 3,” but why should it? It’s a fun action comedy that fits nicely into this superhero filled summer.

“Kung Fu Panda 2” sort of works as a prequel as it tells us of the backstory of our favorite rotund kung fu fighting panda bear Po (Jack Black). We remember from the last film that Po became the new Dragon Warrior much to Master Shifu’s (Dustin Hoffman’s chagrin. He joined fellow warriors Tigress (Angelina Jolie), Monkey (Jackie Chan), Mantis (Seth Rogen), Viper (Lucy Liu) and Crane (Tobias Fünke himself David Cross). Now we learn that Po’s goose father, the wonderfully lovable Mr. Ping (James Hong), is not his biologically father. Didn’t see that one coming. Turns out an evil peacock named Lord Shen (Gary Oldman) had killed off all the panda bears because a “warrior of black and white” would one day defeat him, but not before Po’s mother hid her baby in a vegetable crate, which made its way to Mr. Ping’s noodle shop. Now Lord Shen is back with a bunch of scary wolves and a powerful weapon and he’s hell-bent on revenge since he was exiled for killing off all those giant pandas.

There are several things I love about this movie and this series in general. First of is definitely Mr. Ping, Po’s father. I don’t know if it’s Hong’s great voicework or the terrific animation or the funny lines he says, but this is definitely one of my favorite characters. I sort of wish he were real. If I was ten years old I would definitely have a Mr. Ping toy or stuffed animal. I love the comradere of the Furious Five. Each character is well defined and their interactions are great and the talent behind each voice (even Jackie Chan!) is tremendous. I loved learning more about where Po came from because since the first movie, my main question always remained, “Why is Po’s father a goose?” And now I know! Both films are great because they’re essentially just action comedies but they are quite successful at taking traditional themes and story ideas (the story of the hero, destiny, the master & apprentice) and turning them into vividly scrumptious animated adventures. Writers Jonathan Aibel and Gleen Berger never dumb down their script just because they’ve written as “kid’s movie.” And first-time feature director Jennifer Yuh should be proud.

“Kung Fu Panda 2” is a warm, and funny and action-packed successor to the 2008 Oscar-nominated original and certainly a welcomed sequel. And since the film sort of ends with a cliffhanger, I can’t wait for part 3. GRADE: B+

Thanks a lot your blog is very informative.
Keep it always updated.
Kung Fu and Martial Arts Sydney is immensely popular among peoples as it is practiced by the people as a self defence skill.