Bridal Glower: Kristen Wiig is in Over Her Head in the Hilarious but Heartfelt “Bridesmaids” 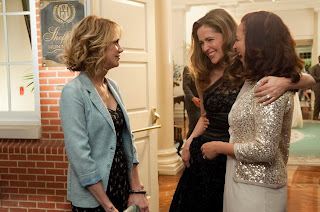 “I’m glad he’s single, cause I’m gonna climb that like a tree.”


When hasn’t SNL cast member and all around funny lady Kristen Wiig not ever been just flat out hilarious? Oh wait, she’s hilarious all the time. And she makes no exception for “Bridesmaids” the over-the-top but sweet comedy she co-wrote about a woman who’s asked to be her best friend’s maid of honor. There are several types of wedding movies. One is all about the over-the-topness of planning a wedding (think Father of the Bride) and the ones in which the friend of the bride or groom is secretly bitter about their friend’s impending nuptials. This sort of works as both. And since this movie carries the Judd Apatow seal of approval, there is plenty of gross out humor to make things wonderfully outrageous.

Most would agree that the previews for “Bridesmaids” looks like a female centered “Hangover” complete with gross out humor and silly characters. And while “the Hangover” was is a classic comedy, even for its young age, it doesn’t quite have the heart of an Apatow production. Kristen Wiig is Annie a lonely, single gal. She has a friend with benefits played by Jon Hamm, but he’s sort of a cocky jerk. She finds out her best girlfriend Lillian (Maya Rudolph) has just gotten engaged and she’s promptly asked to be the Maid of Honor. She accepts but realizes it might be a lot of work and rather difficult to watch her best friend move on with her life, while Annie herself is stuck in a rut. Her ex-boyfriend dumped her after their cake shop went out of business and she has two of the weirdest roommates you’ve ever seen. Basically her life sucks.

Things go from bad to worse when she’s introduced to the rest of the bridal party. She gives the daggers to Helen (Rose Byrne) who is the young wife of Lillian’s fiancé’s boss. Helen and Lillian seem to have gotten very close in the few months they’ve known each other and like any normal person would react Annie gets extremely jealous. It’s because Helen is rich and perfect and beautiful. She even steals Annie’s Paris themed wedding shower theme and throws her the most ridiculous party which leads to one of the film’s funniest scenes in which Annie just goes off the wall crazy. There is a truth to the occurrences in Annie’s situations that ring alarmingly true. She’s easy to identify with and Wiig gives an authentically performance. There’s a subplot about her wooing a British police officer which really adds a layer of reality to the film, but she doesn’t let that get in the way of her being flat out hilarious.

This is a comedy after all and the rest of Lillian’s bridal party is a collection of wacky women all played marvelously but the entire ensemble. We have Becca the reserved newlywed played by The Office’s Ellie Kemper, Rita the miserable married woman with three kids played by Reno 911’s Wendi McLendon-Covey, and Megan, who is sort similar to the Alan character from The Hangover, played by Melissa McCarthy. Megan is a larger, fowled mouthed woman who doesn’t let her weight get in the way of acting like the fiery tart she is. She has some terrific moments one of which includes her having to take a dump in a bathroom sink while wearing a bridesmaid dress.

The film is directed by Arrested Development and The Office alum Paul Feig. He has turned Wiig and co-writer Annie Mumolo’s script into a flat out funny and heartfelt romp that will have you laughing hysterically one moment and then practically tearing up the next. There are scenes are flat-out disgusting and why shouldn’t they be? Women have every right to be as gross as guys and they certainly are here. The rivalry between Annie and Helen is just simply astonishing to watch, and a scene involving the two of them attempting to have the last word while toasting at the engagement party is simply a wonderful scene of hilarity and awkward tension that was luckily left intact and not on the cutting room floor. This is a wonderfully made comedy that will certainly be one of the bigger hits of the summer. GRADE: A

I wish Parker Posey was in it!

Come see Thor with me!!!

yeah that would have been awesome indeed

Asking questions are in fact fastidious thing if you are not understanding something completely, however this paragraph presents
nice understanding yet.
Feel free to surf my site :: meevle.com

I don't even know how I ended up here, but I thought this post was great. I do not know who you are but certainly you're going
to a famous blogger if you aren't already ;) Cheers!
Also visit my page ; Instant Payday Loan 180

Awesome! Its really remarkable piece of writing, I have
got much clear idea about from this paragraph.
Also see my web site > Cash loan

Thank you for the good writeup. It in fact was a amusement account it.
Look advanced to far added agreeable from you! However, how could we communicate?
Also visit my homepage ; fastpaydayloans

Definitely believe that that you stated. Your
favorite justification appeared to be at the web the easiest factor to take into
accout of. I say to you, I certainly get irked even as other folks think about concerns
that they plainly do not recognize about. You
controlled to hit the nail upon the highest and defined out the whole thing without having side
effect , folks could take a signal. Will probably be
back to get more. Thanks
Here is my web page - http://webvidx.com/

I blog often and I seriously thank you for your information.

This article has really peaked my interest. I am going to bookmark
your website and keep checking for new details about once a week.
I subscribed to your Feed as well.
Feel free to visit my homepage : http://wiki.osgeo.jp

I have read a few good stuff here. Certainly price bookmarking for revisiting.
I wonder how much effort you put to create this type of wonderful informative site.
Feel free to visit my web site ... Quick Cash Loans

Hi there to all, because I am genuinely eager of reading this web site's post to be updated regularly. It consists of fastidious stuff.
Have a look at my web site ... Same Day Loans 118

Greetings, I think your site may be having browser compatibility problems.
When I take a look at your website in Safari, it looks fine but
when opening in IE, it's got some overlapping issues. I just wanted to provide you
with a quick heads up! Aside from that, fantastic site!

I was suggested this website by my cousin. I'm not sure whether this post is written by him as nobody else
know such detailed about my trouble. You are amazing!
Thanks!