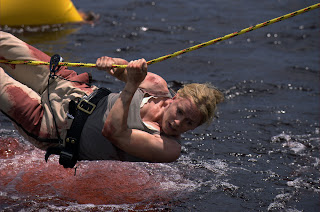 “Piranha 3D” is a masterpiece. It’s not “Citizen Kane.” It’s not “Casablanca.” It’s not “The Godfather.” But you know what? For a 3D movie about prehistoric killer piranha it’s certainly the best movie of its kind. It’s nearly perfect because it meets pretty much expectation you’d have from a movie called “Piranha 3D.” It doesn’t disappoint in the slightest, it delivers. I don’t care how cheap the thrills or laughs are. I don’t care that this is not highbrow cinema. I don’t care if it’s a remake of a movie that was itself a rip-off (of “Jaws”). It’s called “Piranha 3D” for crying out loud. And it is freaking awesome!

This is probably one of the goriest movies I’ve ever seen in my life. And I’ve seen more gory movies than I care to discuss. If I did, you’d probably assume I was a serial killer or something. What’s wrong with a little blood in movies? Nothing if you ask me. More blood the merrier. Here wet some of the most gruesome onscreen deaths I’ve ever seen. They are creative and bloody and put other horror franchises to shame. Mostly because they occur in broad daylight. In fact 99% of this movie takes place during the day. Suck on that Jason Voorhees! If you want to see a woman’s face get ripped off after her hair gets stuck in a boat’s propeller then see “Piranha 3D.” If you want to see a naked co-ed get sliced in half by a cable then see “Piranha 3D.” If you want to see Jerry O’Connell’s, um, member gobbled up and then immediately burped up by a piranha then see “Piranha 3D.” It goes for the jugular. Literally.

Ok so most movies have plots and even some horror movies do. What we get here is a bunch of spring breakers partying it up on Lake Victoria. The always wonderful and game Elisabeth Shue plays the sheriff of the town and she’s busy with all those druken kids so she enlists her teenage son Jake (Steven R. McQueen) to watch his younger brother and sister while she’s on duty. But Jake is recruited by sleazy porn director Derrick Jones (O’Connell) who wants Jake to show him around the lake to get the best footage for his Wild Wild Girls video. Jake also has a thing for his classmate Kelly (Gossip Girl’s Jessic Szohr) and we can all assume they will get together in the end, provided they don’t end up as fish food.

The movie opens with an appearance by Richard Dreyfuss, playing a nod to his “Jaws” character Matt Hooper. A small earthquake opens of rift in the lake floor which unleashes a bunch of prehistoric piranha who have apparently been living down there for centuries (Fortunately a wild-eyed Christopher Lloyd stops by long enough to provide some exposition on these killer fish). And boy are these wonderfully cheesy CGI creations hungry! And lucky for them there is plenty of hot flesh for them to feast on, but not before chomping down on Dreyfuss and causing a big bloody mess. So once the piranha realize there is a bunch of skanky, drunken co-eds to munch on we get scene after scene of graphic piranha attacks. And it seems like there’s no two deaths done the same. Even horror director/fan Eli Roth shows up as a wet t-shirt emcee who gets his face smash off by a speedboat.

“Piranha 3D” is directed by Frenchman Alexandre Aja who made the wonderfully gory thriller “High Tension” and the recent flicks Mirrors and “The Hills Have Eyes.” He knows exactly what his audience wants and he gives it to them. He’s wonderful at making us laugh when it’s time to laugh and squirm when it’s time to squirm. The screenplay by Pete Goldfinger and Josh Stolberg, who previously collaborated on the wonderful 80s homage “Sorority Row” are in fine form here. They have crafted a “Snakes on a Plane” type of comedy/thriller that is extremely self-aware that it’s a movie about killer fish (And it all sort of made me think how fun it would have been to see "Jaws 3D" in the theater back in the day). All of those involved certainly don’t hold back. And the performances are pretty good considering. I’ve always been a fan of Shue and I actually believed her character. She was pretty badass if you ask me. And was the film worth the 3D admission price? Heck yeah!

“Piranha 3D” is one of the most fun times I’ve had in the theater in a long time. I loved the humor I loved the gore. I loved how absurd it all was and how the filmmakers were constantly aware of their audience and what it would be like sitting there watching this all come together. As a huge horror fan, and a fan of the original 1978 “Piranha” film and it’s equally shameless made-for-cable remake starring Baywatch’s Alexandra Paul, I can say that whether you want to call this thing a remake or a reboot or a sequel, “Piranha 3D” is an awesome horror film. Like me, any gorehound is guaranteed to have a bloody good time. GRADE: A

Genuinely when someone doesn't be aware of after that its up to other viewers that
they will help, so here it takes place.

I do consider all the concepts you have introduced for your
post. They are very convincing and can definitely work.
Still, the posts are very brief for newbies.
May you please prolong them a bit from subsequent time?
Thank you for the post.