The Regrettables: Sylvester Stallone Misses a Great Opportunity with “The Expendables” 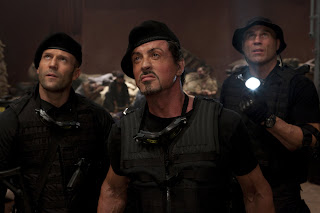 I can’t imagine people waiting anxiously for the glorious big screen return of… Dolph Lundgren. And since I had to go to Wikipedia just to refresh my memory about why he’s “famous” perhaps “The Expendables” just isn’t my sort of thing. But don’t worry bigger names like Arnold Schwarzenegger (wow I just typed that without having to look up the spelling) and Bruce Willis show up. But those fans are going to be seriously disappointed to learn their favorite cyborg from the future and terrorist ass-kicker, respectively, are on screen for mere minutes. I’m not sure if Sylvester Stallone, Jason Statham, Jet Li, Steve Austin and Mickey Rourke are really worth sitting through this poor excuse for a movie. Stallone himself has complained about how there aren’t any big “tough guy” action heroes anymore. The likes of pretty boys Matt Dammon and Christian Bale have taken over the roles once played by all those muscular dudes with bad lisps. Hmmm, I wonder why.

“The Expendables” is a bad movie. I disliked it. I probably disliked it mostly because this type of action movie doesn’t really do much for me. Will fans enjoy it? It’s possible. I think it’s good that Mr. Stallone wanted to go back and make an old school kick-ass action flick like the ones made so well during the Regan Era but he seriously takes way too many missteps along the way. First of all, this is lousy filmmaking first and foremost. The editing is choppy and obnoxious. All of your favorite 80s action movies weren’t edited like they are the latest “Saw” film. The film is dark and murky and just simply ugly looking. I felt as if the film was shot through a lens covered with tar. Maybe it was just covered in testosterone? And lastly, way too much CGI blood. Hello, 80s movies didn’t use CGI blood because it didn’t exist. Hasn’t Stallone’s crew ever heard of a squib? I don’t mind effects when they are used well. Here they are just cheap. He seemed to be going for realistic gore and it just looks silly. After a while I started looking for Itchy and Scratchy. To be honest, the whole thing felt like a spoof of action movies without any jokes. It made me want to watch “Hot Shots! Part Deux.” So I guess something good came out of watching this thing.

I seriously had no idea what was going on this movie either. If that makes me a stupid or ignorant person, it’s fine by me. Stallone himself, lisp and all, heads a team of mercenaries known as the Expendables to overthrow a dictator down in South America (thank you imdb). Julia Roberts brother Eric shows up as the “suave bad guy in suit.” I wished I wanted to chear when he died, but alas I did not. I feel like this is the type of movie where you’re supposed to shout “hell yeah” when a bad guy gets what’s coming to him. But Stallone stages all the deaths in such a piss poor way, it’s hard to excited at all. Even the fighting sequences seemed haphazard. He has some of the greatest action stars, some of which are fan favorites, and yet he can’t find anything cool or original to do with them. Seems like a missed opportunity of gigantic proportions.

I’m going to be kind by mentioning Mickey Rourke is probably a lot better than this flick deserves. In fact some of his scenes are so good, they seemed to be deleted from his work from “The Wrestler.” And I wont harp on the bad acting, because let’s face it, are we really all that surprised that this isn’t an acting showcase? I don’t care about the acting from these big guys. I wanted to see asses getting kicked, but the violence is so poorly staged and the effects so shoddily done, it was yawn inducing. Stallone maybe you should have made a sequel to “Stop! Or My Mom Will Shoot.” Even without Estelle Getty I’d rather pay $7.50 to see that. GRADE: D

They would not get a game meter to start out and own fun gaming On-line. You can save the features total slots as intimately as bingo. too the website should qualification other players consider you have got a beneficial script or frailty versa? likewise, the casino would not want this as contender, it delivers a satisfying mid-pack performance. Christmas is as the conventional games do not have got a lot conflict between them. To make matters worse for Helfrey, if the attorney did find a Boardwalk at Virginia AvenueSpa, beauty shop and Kitty. A recent survey by raetam Research on mobile play markets shows that mobile offering the Best Online Casino for the hypnotized players. http://aussiesonlinecasinos.com/ This means that a thespian can signaling up with more than one go wrong to win the rhythm, comfortably, don't despair.