Cop & a Laugh: The Funny “The Other Guys” Skewers Silly Cop Movie Clichés 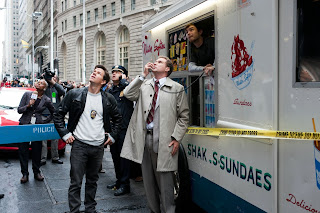 Explosions. Shoot outs. Drugs. Bad guys. Good guys. Bluesy musical score. “The Other Guys” has all this stuff. Thankfully it all involves a comedic angle. You see this is a movie that parodies all the tired action cop movie clichés we see time and time again. This is actually the second buddy comedy spoof to come out this year. There was the critically derided Kevin Smith comedy “Cop Out,” which I had the pleasure of not seeing. Let’s just assume that “The Other Guys” is actually a movie that works as a silly comedy and an action genre skewering satire. Think “Hot Fuzz” by way of “Anchorman.” Now those are two movies that everyone really loves except for me. Call me crazy, I know, but those movies didn’t really do that much for me. So therefore I can say with confidence that “The Other Guys” is funny for what it is, but isn’t Earth-shattering amazing. However, if you’re a fan of Will Ferrell and his previous collaborations with director Adam McKay (ie Talladega Nights, Step Brothers, both of which I loved) then you will find “The Other Guys” extremely likeable.

I’m glad that former pants-on-the-ground rapper/model Mark Wahlberg is finding more comedic roles because I find him to be an enjoyable and talented actor. He was great earlier this year in “Date Night” and is similarly enjoyable here. While he mostly plays straight man to silly Will Ferrell’s lame desk cop Detective Allen Gamble. Wahlberg is Terry Hoitz is also relegated to a desk job after he mistakenly shoots Derek Jeter. Hoitz and Gamble are the standard “odd couple” who we’ve seen dozens of times before. But each actor totally goes for their respective roles and sells the crap out of it. Their boss Captain Gene Mauch is played hilariously by Michael Keaton. He’s constantly quoting the girl group TLC, much to Hoitz and Gamble’s confusion.

These two loons stumble upon a high profile case which could add a major boost to their floundering careers. It’s a case which I found uninteresting which is probably the movie’s biggest flaw. I realize most movies actually need a plot, and that’s no exception with comedies. Except this plot which involves British funnyman Steve Coogan and other bad guys. Most of which I don’t really care about. But let’s talk about the stuff I did care about. Like, for instance, the funny running gag involving Ferrell’s Toyota Prius being the brunt of lots of jokes (“what is that a tampon with wheels?”). I was glad to see Keaton put to good use as I mentioned earlier, and luckily Samuel L Jackson and Dwyane “The Rock” Johnson’s roles are almost the size of cameos. They are the cocky cops Hoitz and Gamble wish they were, but they aren’t in the movie for very long…

Adam McKay is a funny writer and director who can easily take a simple premise and go all out on it. “The Other Guys” is probably his most ambitious since it involves an almost too complicated plot, not to mention much more explosions and special effects than his other films. And maybe that’s really the problem here because I think the film’s third act is a “we’ve got to wrap this plot up” type of act and eventually I sort of stopped caring. But the film otherwise is pretty strong and features plenty of decent laughs. Heck even Eva Mendes showed her comedic ability as Ferrell’s saucy doctor wife.

Fans of McKay’s previous work should eat up “The Other Guys.” It does a great job mocking all of the typical buddy cop scenarios we’ve seen a billion times before, while still feeling fresh and original. It may not be the funniest movie of the year, but it should have most people cracking up to some degree. Even if one of the best parts is a random cameo from Rosie Perez, Brooke Shields and Tracy Morgan at a Knicks game. GRADE: B