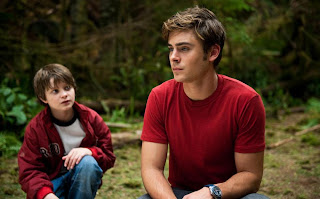 You wouldn’t assume that a kid who starred in made-for-TV movie called “High School Musical” would become such a successful movie star. There are always unexplainable things in the universe and that’s just one of them. The fact is though is that Zac Efron, for all the tween girl obsession that he receives, isn’t actually a horrible actor. Ok, he’s not really a great actor, but he does have some presences and enough ability to carry a movie. Even if it’s one about playing an adult in a teen’s body or playing a teen who plays catch with his dead brother’s ghost. I’m confident that one day Mr. Efron will find a project that will fit him well and sort of give him some street cred. I thought that was supposed to happen with “Me and Orson Welles” but I guess not. But here in “Charlie St. Cloud,” the story of a young guy who loses his little bro in a tragic accident and then somehow gains the ability to see dead people, he’s decent enough to not make me feel embarrassed for actually paying money to see this movie in the theater.

If you’re not sure what Charlie St. Cloud is about, think “what if The Sixth Sense had been originally written by Nicholas Sparks of The Notebook fame?” And then you get Charlie St. Cloud. Throw in a little mix of Ghost and you can see where this is going. And I’d be lying if I said I wasn’t totally shocked by a third act plot development. Sue me, I didn’t see it coming. But then again, I didn’t really get all of “Inception” either. So there you go. Efron plays Charlie St. Cloud. He’s a sailor. He races boats. He’s about to graduate high school and attend Stamford in the fall. Everyone in town knows him. He’s the guy all the teen girls in the town dream about dating. Ya know much like Efron himself. He has a special bond with his younger brother. It seems as though their father is either dead or somewhere else. They are like best buds. Cue the drunk driver who smashes into Charlie’s car, killing poor little Sam (played by Charlie Tahan). Cut to the funeral where Charlie is so verklempt , he can’t even throw his bro’s baseball glove in his open grave. He proceeds to run into the woods, where he runs smack into little Sam. He makes a promise to him that he’ll play catch with him for an hour every day before sundown.

We then flash-forward five years later. It turns out Charlie gave up on his dreams as characters in movies like this tend to do. He never went to school and has chosen to work as a groundskeeper in the graveyard where Sam is buried. Now he’s not only known as the town heartthrob, but the town nut as well. He hasn’t even gone sailing since his brother’s death cause it was something they loved doing together. He does catch the eye of a pretty girl he went to high school with named Tess (Amanda Crew), who is also a sailor, and has plans to sail around the Cape of Good Hope. Who wouldn’t want to do that? So they sort of start a fling, and now Sam starts to feel left out, as dead people usually are left out of the loop.

I won’t delve that much deeper into the plot, and to be honest, do you even really care? This is a movie tailor made for the tween/Twilight set and they ate up every single minute of it. I couldn’t believe the squealing I heard whenever Zac made puppy dog eyes at Tess and stared blankly into her eyes. I want to actually tell you more of what happens. But I won’t tell you that Sam is not the only dead person Charlie sees. Whoops I said it. Director Burr Steers, who also worked with Efron on “17 Again” does like working on stories with some kind of fantastical element, and it seems to fit well here. This just feels more like candy coated melodrama, but you know what? I was entertained by it.

“Charlie St. Cloud” is Efron’s attempt to become a more dramatic actor. He’s certainly on his way, but he won’t make it too far if he’s stuck in schmaltzy stuff like this. Granted it’s exactly what his fans want, and I believe that he will crossover as a mainstream actor one day. Just look at Leonardo DiCaprio, he was a teen heartthrob stuck in romance epics and now he’s an Oscar-worthy actor working with today’s top directors. Fans who know what they are getting into with this flick will enjoy themselves. Anyone else who’s being dragged? Hunker down and pray for daylight. GRADE: B