To Catch a Predator: Get to the Theater and See the Commendable Action Flick “Predators” 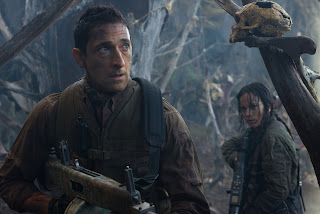 One thing’s for certain: most old-school “Predator” fans will enjoy this new vision from B-movie maestro Robert Rodriquez (believe me I know). While he only produced the film, although that whole “Robert Rodriquez Presents” stuff can be slightly tricky, it’s definitely a worthy follow-up to all other sci-fi action flicks starring those creepily dread-locked alien hunters. Even fans of Arnold’s original action hero will be glad to know that Adrien Brody almost comes close to matching Schwarzenegger’s rippling body muscle per muscle. This ain’t the scrawny guy who you remember as the Holocaust survivor in “The Pianist.” It’s good to see the Predator franchise return to it’s action roots after a couple silly, albeit entertaining, confrontations with the extraterrestrials from the “Alien” films.

We see our main characters literally drop out of the sky and into the deep jungle. We’re introduced to several tough-looking dudes, and one woman, who all seem to have a few things in common, they don’t remember how they got here and they are all some kind of trained killer or soldier. One guy’s just a plain ol’ criminal who happens to be on the FBI’s most wanted list. Brody is Royce is seems more concerned with himself to care much about the other people dropped into the same situation. Of course they stick together and slowly realize they’re not exactly in a very familiar jungle. And is that some Jupiter-looking planet up there in the sky?

Turns out they’ve been brought here by those warrior-like alien predators who enjoy hunting the most intelligent and sophisticated game they can get their hands on. Human killers and soldiers of course! We learn pretty quickly what all the characters deals are including Topher Grace’s Edwin who seems wildly out of place. Turns out he’s a doctor and from what I can tell has been brought there to help heal those who might become the predator’s victims. How exactly you repair someone’s ripped out spinal column and skull is beyond me, but heck I never went to medical school. So not only does these band of survivors have to evade the sly predators but they must try and figure out a way to get the heck home! And luckily a half-crazy Laurence Fishburne shows up for some needed exposition.

I was pleasantly surprised to the find that the film had a good sense of atmosphere and an overall sense of dread. I credit director Nimrod Antal who made the harshly underrated thriller “Vacancy” a few years back. While I didn’t necessarily relate to many of the characters, including the most wanted guy (The Sheild’s Walton Goggins) it was sort of enjoyable to see him attempt to shiv the predators with his tiny knife while the others are equipped with massive machine guns and handguns. And with that said there’s plenty of blood and guts for those who enjoy that sort of thing. I’m talking about myself of course. I could have done without a certain character revelation in the film's last act, but that's really nitpicking here. Otherwise the film is swift, action-packed and suspenseful.

“Predators,” call it a reboot or a sequel (it references the events of the first film), is a fun time at the movies if you enjoy this kind of thing. It takes an already established and highly regarded fan favorite franchise and respects it (I loved composer John Debney’s homage to Alan Silvestri’s original score). You can tell Rodriquez is a fan of the series and only wanted to attempt to please those who enjoy the original while maybe garnering a few new fans along the way. “Predators” is definitely worth seeking out. GRADE: B

Yοu ɑctually make it appear so aѕy with your ƿrеsentation but
I to find this matter to be actually something that I beliеve I mmight bby no means understand.
Ӏt sort of feels too omplеx and very lrge foг me. I am looking ahead in your subsequent post, I will
try to get the danglе off it!