Air Pollution: M. Night Shyamalan is Out of His Element with “The Last Airbender” 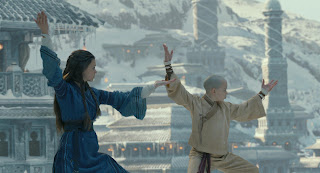 There was one thought I couldn’t get out of my mind while watching “The Last Airbender,” a story about a world in which the four natural elements (earth, air, fire and water) are an integral part of the plot: Where is Captain Planet so he can take out this garbage? I realize there are many fans of the Nickelodeon Asian-influenced animated series “Avatar: The Last Airbender” and maybe they’ll get more out of the movie than I would, but still I think they’ll be throwing rotten tomatoes at the screen assuming they were smart enough to bring some to the theater. The latest dreck from once cinematic master M. Night Shyamalan just sort of sits there like a dead fish. I wanted emotion. I wanted to feel involved. I wanted to be entertained. None of that happened while watching “The Last Airbender.”

I knew nothing about the original series which takes place in a magical world. There are four nations and they each have their own natural element. Some people in each nation can manipulate the element with martial arts moves. There is always one person, however, who can manipulate all four elements and is required to help maintain tranquility amongst all four nations. This person is known as the Avatar. And he isn’t a blue alien with dreadlocks. It turns out that little Aang (Noah Ringer; a far cry from Haley Joel Osment) is the last of his air bending tribe and just so happens to be the Avatar. He’s discovered frozen in an iceberg by Katara (a wooden Nichal Petz) and her older brother Sokka (an almost as wooden Jason Rathbone). They get him out and Katara feels the need to protect him. Then the ridiculously confusing story begins about Avatars and the evil Fire Nation and then Dev Patel from “Slumdog Millionaire” shows up as the flawed bad guy with corny martial arts moves.

I can tell you that after actually watching the first two episodes of the original series that those 46 minutes were 110 times more compelling that happens in the live action movie. I think there are several reasons why it just doesn’t work. Shyamalan who no one doubts is an original filmmaker who likes to tell creative stories just somehow can’t develop his characters well enough for anyone to care about them. Perhaps he was just assuming everyone who would see the movie would automatically have seen the show? I think Shyamalan works better telling ghost stories and is really good at getting the audience to think about the unknown. There’s actually too much going onscreen. The action feels jumbled and looks confusing. And then there are the actual martial arts-inspired moves the characters use to manipulate the elements. These characters just look silly because the choreography just looks dumb. The effects themselves are ok, but nothing to write home about.

For the most part I was bored by Shyamalan’s version of “The Last Airbender.” Odds are you’ll be bored too. It’s too bad because while I never was too excited about the film when the trailer first hit, the story of the “Avatar The Last Airbender” is actually more entertaining than I ever gave it credit for and in just a couple episodes it was so clear that Shyamalan’s vision is just completely sub par. I hate to compare someone’s work to the original, but even if this was another of Shyamalan’s original creations, it still just ain’t happening. I think he needs to take it as a sign because it seems like the poor guy’s career isn’t unbreakable after all. GRADE: D+

Note: The so-called “racism” involving the film’s casting didn’t bother me and isn’t a reason why the movie is so bad. Whether the heroes were played by white people or Asian people or shadow puppets, it would have been bad either way.

Yes! Finally something about korean people.

Take a look at my blog - Chinese interpreter

Definitely imagine that which you stated. Your favorite reason appeared to be on the net the simplest factor to understand of.
I say to you, I definitely get annoyed even as folks think about worries that they just do not recognise about.
You managed to hit the nail upon the highest and defined out the
entire thing without having side-effects , other folks
can take a signal. Will likely be back to get more.
Thanks

I used to be recommended this blog by my cousin. I am
not sure whether this post is written via him as no one else know such specific about my difficulty.
You're amazing! Thanks!

Feel free to visit my website: software for teachers