The Brat Pack: “Grown Ups” is Stupid and Childish and Sort of Funny 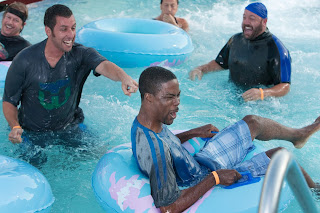 Adam Sandler never really attempts to make amazing films. And sometimes you just have to admire that. You can easily get a well written comedy by the likes of Woody Allen or Judd Apatow, but sometimes you just want dumb, dumb, dumb. Just credit Sandler as the screenwriter and pair him with director Dennis Dugan and there ya go! You have crappy comedy gold. I’m not saying that Sandler isn’t a talented person or anything; he’s made a terrific career from playing goofballs (Happy Gilmore) and idiots (Billy Madison) and buffoons (The Waterboy) etc, but he does seem to make the same movie over and over again. Of course sometimes we want to see something stupid. After all, who doesn’t enjoy “Happy Gilmore” on some level?

With Grown Ups we get more of the same childish antics and scatological jokes, constantly being performed by supposed adult characters. Here we have Sandler as Lenny Feder, a rich movie producer with bratty kids and Salma Hayek as his wife. He learns that his old basketball coach has passes away and reunites with his former buddies for the funeral and weekend in lake house with their families. Think “The Big Chill” but with no artistic merit whatsoever. In fact the whole movie can best be described as lame and with sophomoric comedy with unnecessary emotional drivel. But you know what? I actually was amused and laughed. And that’s a lot more than I can say for the Get Him to the Greek, a comedy that hardly made laugh at all.

So who are all the other “grown ups” in this movie? We have Kevin James playing Eric, who’s married to Sally (Maria Bello). As an aside I’d like to say that I enjoyed watching actresses like Salma Hayek and Maria Bello slum it up in a dumb movie like this. I take it that they don’t take their dramatic acting careers too seriously and know how to let loose and have a fun time. And besides, they can actually sometimes be funny. Eric and Sally have two kids: a rotund daughter who seems she could pass for James’ real life offspring and a four year-old son who still breastfeeds. Prepare yourself for lots of breastfeeding jokes. Then we have Chris Rock who plays Kurt. He’s married to Deanne (Maya Rudolph) and they have a couple of kids too. Deanne’s mother tags along to provide mean jokes at Kurt’s expense. The always unreliable Rob Schneider doesn’t even get a fresh character name; he plays Rob who has a thing for older women and he’s married to Gloria (Joyce Van Patten). Expect lots of old ladies are gross jokes. Then there’s the fifth friend of the group, who seems like the most unnecessary character of the lot Marcus, played by David Spade. He’s not married and comes to the lake house for the weekend by himself. He’s basically just the gang’s punching bag. In fact, 85% of the dialogue has to do with the characters insulting each other.

Since there isn’t really a plot, I won’t bring it up. So basically that’s about it. We get scenes of the guys learning some life lessons, taking the kids to a water park, where they turn the water blue in the kiddie pool by urinating in the water. Although the gag would have worked better if the water turned a different color, let’s say green, cause let’s face it, pool water already looks blue. And sue me for chuckling when Salma Hayek, while attempting to skip rocks, chucks a stone at her son’s stomach.

Grown Ups is exactly the type of movie you think it is. It’s just as dumb as any of the other scripts Adam Sandler has written before: Billy Madison, Happy Gilmore, The Waterboy, Big Daddy etc. While Sandler has shown range in other movies like “Punch Drunk Love,” “Spanglish” and the recent “Funny People,” “Grown Ups” proves that you can take the man out of the child but you can’t take the child out of the man. Wait, what? GRADE: B-

Good article. I definitely love this site. Thanks!