Brother, Can You Spare Some Time? “Prince of Persia: The Sands of Time” is a Decent Enough Time Waster 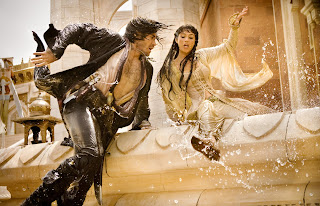 “Prince of Persia: The Sands of Time” dares to answer the age old question: Where the beef? Apparently it’s in the formerly scrawny Hollywood actor Jake Gyllenhaal. Most people will make a big deal about Jake beefing up for the role of a Persian prince who was made popular in a video game series that I don’t know anything about. To be honest I wasn’t really expecting much from this Jerry Bruckheimer production besides lots of dizzying camera tricks and explosions and never-ending action sequences. Yes the film has all of that but it does breeze by and luckily it lasts under two hours instead of those other bloated “Pirate of the Caribbean” movies which seem to go on forever. That being said, I can’t exactly say I loved “Prince of Persia” but at the same time I found myself engaged enough where I didn’t feel the need to claw my own eyes out, so there’s that.

I was worried the plot would be inconceivable, much like those overblown “Pirates” movies where even the most bloated scenes of exposition don’t seem to make a whirl of sense. I think I got the gist here. Basically back when the Persian Empire was taking over the Middle East, the King came across Aladdin, um, I mean Dastan a young street rat. He liked his spunk and decided to adopt him as a son. He grows up to be Prince Dastan (Gyllenhaal) who doesn’t even remotely look Persian. Do I even know what a Persian looks like? Not really, but I’m assuming not like Jake Gyllenhaal. But I digress, as the young man, who is envied by his “brothers” and even his uncle (Ben Kingsley). Someone is a little too jealous and poison’s the King’s cloak. Using some form of acid (perhaps Alien blood?) the King is murdered. Dastan is the obvious scapegoat and in a scene right out of The Lion King, Dastan is exiled from his former palace home.

Meanwhile a dagger which has magical time travel abilities makes itself known when Dastan mistakenly presses the button on the handle. It sends him in back in time about thirty seconds. Tamina (Gemma Arterton) is a princess whose city was taken over by the Persians. Dastan sets out to prove his innocence, while Tamina’s only concern is this magical Dagger which can turn back time. These two can’t seem to get along and it proves right from the beginning that they will fall in love. Meanwhile they meet up with Sheik Amar whose main concern is ostrich racing. Amar is played by Alfred Molina and as you can imagine he’s better than the movie deserves. Thank goodness for Alfred.

There is a lot more going on and I think I understood what was going on, but I’d rather not discuss it because honestly does anyone really care? I certainly don’t. The film is based on a video game so plot isn’t exactly something to be too concerned with. Director Mike Newell, who Harry Potter fans will recognize as the director of “Goble of Fire,” seems suited to the material, oh I dunno because I guess it makes sense for the direct of “Mona Lisa Smile” to graduate to directing a Jerry Bruckheimer action spectacle.

Let me be frank, this isn’t mindless action entertainment like Michael Bay gives us. There are many worse movies than “Prince of Persia: The Sand of Time.” It’s really just an average action movie with fantastical elements that will certainly please fans of the videogame. It all really felt like a weird mash-up of Indiana Jones, “The Mummy,” “Aladdin” and “Pirates of Caribbean.” I had a good enough time; do I really want to watch it again? Not really. It has good performances from its actors (although is it me or does Ben Kingsley sometimes give really silly, campy performances?) and its plot isn’t quite as incomprehensible once you kind of sort it all out. Jake and Gemma have good enough chemistry and at least everything is over pretty quickly. You could do a lot worse. GRADE: C+