Greek Tragedy: “Get Him to the Greek” is Somewhere I Wish I Hadn’t Gone 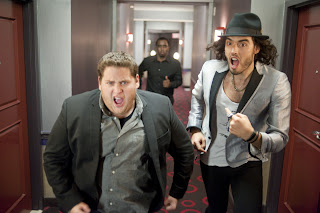 I’m sort of surprised by the decent reviews of the latest Judd Apatow produced comedy “Get Him to the Greek.” Ok sure it doesn’t have a 100% fresh rating on Rotten Tomatoes, but the fact that anyone could think this film is as good as all the other great recent comedies out there is seriously crazy. I really enjoyed “Forgetting Sarah Marshall,” which was wonderfully written by (and starred) Jason Segal. That film featured a wonderful scene stealing turn by British comedian Russell Brand, as wild rocker Aldous Snow, who stole the aforementioned Sarah Marshall away from our hapless hero. He was so enjoyable that those silly Hollywood people actually though he should have his own movie. It was a decent idea and I think it’s better than a flat out sequel, which would just feel unnecessary. Here however, unless you think Aldous Snow is the funniest character since Borat, you might find yourself in search of serious laughs. I didn’t find very many in “Get Him to the Greek.”

The one thing about an Apatow Production is that whether you find yourself laughing hysterically or not, you bound to at least be entertained. I was mildly entertained by this film, but I didn’t really care about the characters and I never felt any suspense as to whether Jonah Hill’s character Aaron Green would actually succeed in his mission to escort the crazy Mr. Snow to the Greek Theatre in Los Angeles for his anniversary rock concert. This could have been a wild and fun road movie where crazy things happen (Road Trip? Or even “The Hangover”) but instead we just get scenes of Aldous partying it up. I think there’s supposed to be some skewering of the music industry somewhere in here, but since I’m not very well-versed in that area I’m sure many things went over my head… but not all.

There are some things that writer/director Nicholas Stoller (who directed “Forgetting Sarah Marshall”) gets right thankfully and that is the songs performed by Aldous Snow and his equally outlandish ex-girlfriend Jackie Q played hilariously by Rose Byrne. I think the movie should have followed her around for two hours. She has a few amusing song performances of which we see in music video form (one of which we see was directed by Hollywood punching bag Brett Ratner). The movie plays up the idea that songs like “Inside of You” “Supertight” and “African Child” could actually be hit songs in the real world. Although to be fair in the world of “Get Him to the Greek” African Child completely bombed and signaled the beginning of the end of Aldous Snow. The mocking of the celebrity life and culture is what this movie does best and if it focused more on that than just Jonah Hill and Russell Brand hamming it up and smoking pot and drinking alcohol and smuggling heroin I think it could have been a lot funnier. And thank God for that Kristen Bell cameo as Sarah Marshall starring in a new TV drama called “Blind Medicine.”

“Get Him to the Greek” is entertaining for the most part when it’s not trying to be overly sentimental or getting bogged down in tiresome third act plot developments. (Our two heroes and Aaron’s girlfriend, played by Elisabeth Moss, seems weird and unnecessary especially when we feel like the movie should be coming to an end). Long story short (too late) is that maybe I just didn’t love Aldous Snow enough for him to get his own movie. If you love that character then you will probably love the movie. For anyone else you’re better off waiting for Judd Apatow’s next production. GRADE: C+

PS – And what’s with “Sean Combs” in this movie anyways? People are saying he’s funny, I certainly didn’t think so.