A Knight to Remember: “Knight and Day” is a Fun Summer Action Comedy 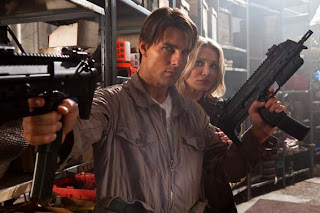 “Knight and Day” is a loud action movie with lots of CGI effects and movie stars and explosions and bits of comic relief. It doesn’t really offer much more than that, but what do you expect from a summer movie being sold on the promise of being just a fun, action comedy? If you’re a fan of stars Tom Cruise and Cameron Diaz that also helps. I find them to be enjoyable when they’re in the right movie and here they seem to be a good fit for each other. I last remember seeing them together in the weird “Vanilla Sky,” a movie I didn’t quite get as didn’t millions of other people. But “Knight and Day” is a much more normal movie. You might even call it a retread or clichéd or unoriginal (think "Romancing the Stone" meets "True Lies" with a twist of "Mr. and Mrs. Smith"). “Knight and Day” is a movie that, while not perfect, offers enough benefits that will certainly keep you entertained for its run time.

I don’t care if you think Tom Cruise is crazy, maybe he is, but he’s a decent actor and is charming nonetheless. You don’t turn into Tom Cruise if you don’t at least have some sort of talent. Here he plays Roy Miller a super spy who we’ll learn has gone “rogue.” And don’t ask me if he supports Sarah Palin. He seems to randomly bump into June Havens (Diaz) at the airport and wind up on the same plane together. Of course this is not a coincidence. It turns out Roy has the film’s MacGuffin and the bad guys (whom I’ll always refer to as in this review) want it. Poor June. She just wants to get home for her younger sister’s wedding and within the film’s opening sequences she’s already almost died in a plane which Roy has to land swiftly in a corn field because he sort of shot the plane’s pilot. But I think he was a bad guy. Long story short there are bad guys after Roy’s MacGuffin and June is forced to tag along cause her chances of surviving with Roy’s help are slim.

It’s not a coincidence that when June first bumped into Roy she was attracted to him. If June’s character wasn’t going to find Roy attractive Roy would have probably been played by Steve Buscemi or someone similar. You don’t cast Tom Cruise and not have the leading lady fall helplessly in love. So the rest of the film involves Roy dragging a smitten June around the globe with him as he evades the bad guys. He also has to protect Simon Feck (Paul Dano) who is the brilliant young man who invented the film’s MacGuffin. Along the way we also meet Mr. and Mrs. Knight, who we find out are Roy’s parents, living a quite life in New England. They think they’re son is dead and can’t understand why they keep winning the lotto and Publisher’s Clearing House. That was a nice touch.

James Mangold directed the film, who has made recent movies like Walk the Line and 3:10 to Yuma. I’m not sure you’d expect his next film to be something like “Knight and Day” to be his next logical project, but he seems like a director who is happy jumping from genre to genre. He displays some fun visual tricks which were pretty ridiculous but belong squarely in a summer action movie such as this one. I enjoyed the shot of Roy riding up along a runaway car June is trapped in, jumping off and landing right on the hood of the car. You’ve probably seen that in the trailer, it was absurd then and certainly absurd in context and yet isn’t any less enjoyable. Heck there’s even some witty banter thrown in by first time screenwriter Patrick O’Neill.

“Knight and Day” is a movie that in the wrong hands could have been a big loud mess. Here it’s not so much a mess, but rather a fun, escapist summer movie that will probably be forgotten about in a few years, but still memorable in a summer filled with sequels and reboots and remakes. Oh my. GRADE: B