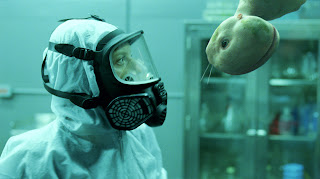 I’m giving “Splice” a positive review overall, but be forewarned this is a super weird film that is not for the average moviegoer’s tastes. It involves a premise we’ve all seen before, borderline “mad” scientists create monstrous creature with the best intentions. Everything then goes wrong. This isn’t exactly “Frankenstein.” It’s not even “The Fly.” I’ve even heard someone refer to it as “Species” meets “It’s Alive.” Whatever you want to call it, it’s certainly unconventionally done as would be expected from the guy who brought us the “Saw” precursor torture flick “Cube” way back in 1997. And of course like all great science fiction it has a social message and deals with ethical and moral situations to the utmost degree.

Like ethical situation number 32, should you mate with the humanoid creature that you created in a lab just a few months prior? Ok ok, I’m getting ahead of myself here and you can consider that a minor spoiler, but odds are your probably not going to be seeing this movie right? Let’s start at the begging, where we’re introduced to Clive (Adrien Brody) and Elsa (Sarah Polley). They are hip biomedical scientists (and lovers) who are really good at splicing together various animal genes to create new species. They work for a pharmaceutical house who funds their research in hopes of creating cures for various human diseases (maybe we shouldn’t be trying this hard to cure cancer, etc?) They created this two alien blob looking creature whom they dub Fred and Ginger. In a little bit of foreshadowing, they want the two of them to mate.

It turns out that Elsa is the real mad scientist here and decides it would be a completely good idea to splice human DNA with that of either Fred or Ginger. Much to Clive’s frustration he hesitantly goes along with it as long as she doesn’t bring the being full term. But of course she does! She births it and nearly dies doing it because apparently their creation has a poisonous, barbed tail. The creature sort of looks like something out of an early Peter Jackson gore fest. And has an accelerated grow, because honestly no one would want to sit through a 4 hour version of this movie slowly waiting for the creature to come of age. Before we know it the little monster is a young girl and then a young woman (played with some CGI help by Delphine Chanéac) with kangaroo legs and a tail.

Then come lots of other ethical issues besides the ones involving whether it’s actually a good idea to splice human DNA and weird creature DNA. Those things I wont get into because it’s probably best to not know. I will praise the film for taking itself seriously because this could have easily gone the campy route but director Vincenzo Natali plays it all straight. He wanted to make the most realistic film he could I believe he succeeded in that arena. There are even scenes that reminded me of parts of everything from “Jurassic Park” to “King Kong.” There will be those who laugh at what they’re seeing on screen, which I think will be a normal human reaction.

I applaud Natali for going to places other directors and studios would have dared not go and good for Warner Bros for releasing a film like this, which could have easily gone straight to DVD for giving it chance. If you’re a fan of science fiction and even horror, although the film isn’t particularly scary, you’d be doing yourself a favor by checking out “Splice.” It’s a film that has some pretty shocking images and will certainly get folks talking long after the credits roll. GRADE: B

Hi there, I enjoy reading through your article post.
I wanted to write a little comment to support
you.

Here is my site - emobile code

Get a professional septic tank cleaning service to
clean and empty the tank at affordable cost.

There are also some requirements to meet, such as enough space and soil.
They alter according to the size of the container you have installed, usage of water, and number
of people staying in a house.

This blog is so nice to me. I will continue to come here again and again. Visit my link as well. Good luck
obat aborsi
cara menggugurkan kandungan
obat telat datang bulan
obat penggugur kandungan