Let’s Hear it For the Toys: The Gang is Back in the Charming and Enjoyable “Toy Story 3” 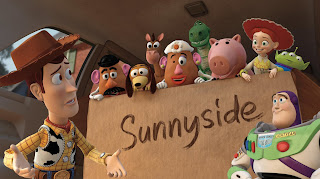 Leave it to Pixar to make a second sequel which feels like one of the most original and entertaining films of the year. See, sequels and remakes aren’t all that bad as long as they’re in the right hands. And Pixar’s hands have the Golden Touch. Sure any movie that has 3 in the title is not going to be the best movie ever or anything, but this proves that a trilogy, that was never meant to be a trilogy in the first place, can have three wonderful films that all fit together perfectly and are constantly surprising, charming and witty. To be honest, the Toy Story films were never my favorites of the Pixar cannon but they are certainly amazing films. So I never felt like I needed to see a third Toy Story film and since Pixar does such a great job coming up with original stories it seemed a little silly that they really needed to make this film. But even though it’s number 3 it’s still fresh and original, for the most part.

It’s been eleven years since the release of “Toy Story 2” and I’m not quite sure how much time has passed in the Toy Story movie world, but now the young boy Andy is almost all grown up. Well he’s seventeen and ready to go off to college much to his mother’s sadness. He’s not really sure what to do with all his favorite toys. They mean a lot to him, but he doesn’t need to pay with them anymore. And Buzz and Woody and the gang are a little stressed out. What’s to become of them? Will they be given away? Will Andy just toss them in the trash? They just want to be played with and loved.

Through a little misunderstanding, as is the case with these films, the gang ends up accidentally being donated to a local day care center called Sunnyside. They meet a bunch of new toys who show them around. This includes Lotso Huggin Bear, a fluffy, purple bear voiced by Ned Beatty. He seems to be in charge and makes the new toys feel welcome. Although things seem fishy when he puts them in the room where preschoolers play and treat the toys as if they were just dinky, disposable playthings. They are painted on, and glittered and thrown against the wall. These little toddlers don’t know how to treat toys exactly because, hey, they’re toddlers. It seems odd that Lotso and his friends are in the room with the well-behaved kids. Hmm I smell a similar Toy Story 2 plotline that involved Pete the Prospector. Leave it to the great minds at Pixar to come up with a plot about day care center being worse than prison. Oh and there’s the new toy Ken (Michael Keaton) whom is certain to be a fan favorite.

I don’t want to divulge too much of the rest of the plot, because that would just be unfair. Sure Toy Story 3 isn’t the most original or even close to one of the best Pixar films, but with such a high track record are you even surprised? It just can’t measure up to the genius that were “Finding Nemo,” “Cars” and “Up.” But you know what? These guys, who worked from a script by “Little Miss Sunshine’s” Michael Arndt, know how to get the audience emotionally invested in characters made entirely out of computer animated pixels. I dare you not to shed a tear at the end and think of all of your own favorite toys you were obsessed with as a kid.

“Toy Story 3” is a well-made sequel, with top notch voice talent and terrific animation, which deserves to sit right along side its equally intelligent and delightful predecessors. It introduces some great new characters and an emotionally rewarding story that will grab your heart and refuse to let go. With success after success does anyone really think Pixar will ever make a crappy movie? I doubt it. GRADE: A-

whoah this weblog is excellent i really like studying your articles.
Stay up the great work! You already know, many individuals are looking around for this info, you could help them greatly.

Thanks designed for sharing such a pleasant idea, article is fastidious,
thats why i have read it entirely