Victoria’s Secret: Bella Must Evade an Army of Vampires and a Love Triangle in the Improved “Twilight Saga: Eclipse” 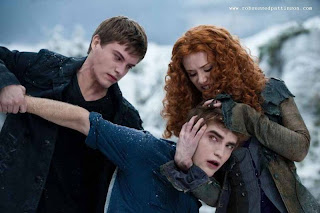 Well all I can say is that “Eclipse,” the third chapter of the wildly successful vampire melodrama, is a vast improvement on the second part “New Moon.” While I didn’t howl with delight at this third entry, I was mildly amused and I think we all credit the improved direction from David Slade (Hard Candy) and better performances from the young cast. I guess they say third time’s the charm and that’s pretty much the case here cause I can definitely see how non-fans of the first two films might actually find something worth watching here, whether it’s the “army of vampires” storyline or the previously mentioned better acting and better directing (it’s darker and more serious). While I can’t call Eclipse an epic, must see, I can say that it could have been a lot worse and it has enough positives to make it worth sitting there for two hours.

I’ve always said from the start that I’m not Twilight’s target demographic (tweens aged 13-17 and cougars aged 45-51), but I found something oddly enjoyable about the first film. I kind of embraced its cheesiness and the exaggerated teen angst love story abut teenage outcast Bella Swan (Kristen Stewart) falling for eternally teenage vampire Edward Cullen (Robert Pattinson). It was fun following Bella as she learned about the mysterious pale-faced boy with wild hair that never seems to move and his close-nit “family.” The next film in the series, “New Moon” boringly followed Bella’s frustration with her Edward leaving her (for her safety of course!) while she bonds with teen werewolf Jacob Black (perennially shirtless Taylor Lautner). To call “New Moon” a snooze-fest would be giving it too much praise because everyone likes a good nap every now and then. Luckily I didn’t find myself falling asleep as much in “Eclipse.”

We remember from the end of the first film, (which technically makes the second film borderline unnecessary and pointless), that the evil vampire Victoria (now played by Bryce Dallas Howard) wants to seek revenge on Edward Cullen because he and his Cullen brothers killed her lover James. Does she want to kill Edward himself? Not really, she’d rather kill his lover Bella because he would ruin his (eternal) life. She begins creating an “army of vampires” by first turning a young college student Riley Biers (played by Xavier Samuel) into a vampire during the film’s opening moments. From there they create new vampires who are thirsty for human blood. Why Victoria doesn’t kill Bella while she’s vulnerable, like in the shower, is beyond me. After all, it worked wonders for Norman Bates. But I digress.

The Cullen family decides to team up with the local werewolf clan whom they have a century’s long feud with. Jacob and his hairy brethren decide to put their issues at rest for now, to help save Bella from the bad vampires. He even uses his stinky b.o. to help mask Bella’s human scent. There is some great tension between Jacob and Edward because let’s not forget that Jacob is in love with Bella too although she’s not certain if she feels the same. Ahh teenage love triangles are the epitome of dramatic tension. There’s plenty of that for the fans, but at least Bella doesn’t do anything too stupid this time around like cliff diving and such. There is a great scene involving a tent that seems to be a fan favorite and actually finds both Robert and Taylor with some fine acting ability. And I enjoyed learning some more about the various Cullen clan, one of whom is completely envious of Bella’s human status. The Volurti, the all-powerful vampire-ruling coven from Italy, show up as well. Yet again they are extremely poorly shoehorned into Melissa Rosenberg’s script and therefore given hardly anything to do, except confuse viewers who haven’t read the books. Thanks for nothing Dakota.

I sort of with the film ended on more of a cliffhanger so that I could feel the urge to want to continue watching this series but it doesn’t really. In fact it could end right here. No need for a weird vampire baby, or whatever it is that happens in the next book. Overall this is an improvement over New Moon, and while the film has a more serious and less corny tone as the first film, I still think that one’s slightly better. You Twihards can judge for yourself. GRADE: B-

When someone writes an paragraph he/she maintains the thought
of a user in his/her brain that how a user can be
aware of it. Therefore that's why this piece of writing is
amazing. Thanks!

Here is my weblog wmmvideo.(...)nMcLaurin