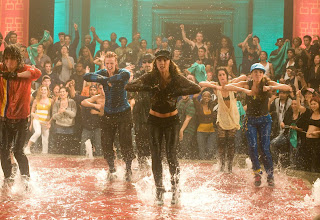 "Step Up 3D" is a horrible, horrendous movie. It has bad acting. It has a clichéd script filled with atrocious lines of dialogue. The direction of the actors leaves something to be desired. However, with all those flaws, I can honestly say the visual aspect of the film is pretty outstanding. This is a film that is fully aware it’s being shot in 3D and it goes for it. The dancing scenes are really in-your-face and the talent of the dancers is simply amazing. It’s too bad they couldn’t read a line of dialogue well to save their lives. If you want cool dancing and a fun 3D experience Step Up 3D delivers. If you care about characters and story, go see “Inception” instead.

I’m not quite sure I even want to discuss the plot. But think of the basic elements of the Muppets flick “Muppets Take Manhattan” sort of crossed with “You Got Served.” We get a bunch of people living together in the city, trying to “make it.” They have big dreams and we have to sit around for 97 minutes while they do it. And spoiler alert, we get a happy ending. We’re introduced to Moose (Adam G. Sevani), who’s entering his freshman year at NYU. Avid “Step Up” franchise fans will remember him from the last movie Step Up 2 the Streets, which featured only two dimensional dancing. Bor-ing! He’ll be majoring in engineering and putting that silly dancing on the backburner. That is until he meets Luke (Rick Malambri, who has about as much charisma and acting ability as tree bark). Luke is a street dancer and aspiring filmmaker (the dream is alive!) who lives with a bunch of other dancers who share some kind of apartment building living space that seems like an unused set from the musical “Rent.” Luke wants to recuit Moose so they can win the battle royale of hip hop battle dancing so they can save their beloved apartment from foreclosure. Luke meets Natalie (Sharni Vinson), who also is a talented dancer whom he lets crash in his place. I think they might end up falling in love, but I’m sure something will get in the way.

Ok I’m not even going to bother with any more plot details because then you’ll just make fun of me for spending 11 dollars on this thing. I don’t ever remember hearing lines of dialogue like “Some people learn to dance... Others are born to.” Sometimes I thought I was watching a reimagining of “Showgirls.” I’m willing to forgive screenwriters Amy Andelson and Emily Meyer since it’s their first script and since they were hired to made a “product” ready for mass consumption. After all, this movie is basically a bunch of impressive dance sequences with a weak, uninteresting story woven in. But enough of that! Let’s get to the good stuff.

I read somewhere that some critic called “Step Up 3D” the best 3D movie since Avatar. And that’s pretty accurate. How to Train Your Dragon featured some cool 3D sequences. Luckily, this is a film that wasn’t just converted into 3D to make a quick buck, it was made using 3D cameras and while some scenes are obviously gimmicky, like floating Slurpees for instance, the effect is pretty darn fun. This, like Avatar, is a movie that really used the 3D to envelope you and make you feel like you’re their. The dancing features great artists who obviously have a tremendous talent and it’s cool to see them putting it to good use. These battle dance scenes, while sort of corny, in a modern “West Side Story” dancing rivalry kind of way, are pretty thrilling if you ask me. And I really enjoyed the old school dance, between Moose and his longtime friend Camille (Alyson Stoner) which featured a decent unbroken tracking shot with Fred Astaire’s “I Won’t Dance” playing on the soundtrack. And let’s not forget the guy (Chadd Smith) who does the robot moves; he was pretty awesome as was everyone else. It’s too bad they only got to play paper thin characters with bad acting ability. Although Joe Slaughter, who played rival dance master Julien, gave Mr. Malambri a run for his money in the horrible line readings department.

So yeah, I’m not too embarrassed to say I enjoyed “Step Up 3D” for what it was. It had cool 3D visuals and awesome dancing, with enjoyable music to go along with it. This is not a movie that’ll be winning any awards anytime soon, unless the Razzies are what director Jon Chu had in mind. GRADE: B-