Great Scott! The Sensational “Scott Pilgrim vs. the World” is an Inventive Romantic Comedy for Video Game Nerds Everywhere 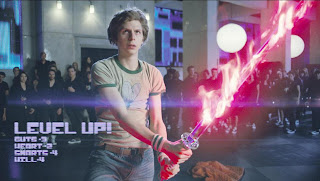 It’s amazing how much director Edgar Wright wants his film “Scott Pilgrim vs. the World” to look and feel like a video game. I can think of movies that look like video games that are just plain awful… Speed Racer… 300… the Star Wars prequels (just kidding!). But besides just corny visual effects, these movies were just silly eye candy that ended up being headache inducing. But with “Scott Pilgrim,” which is based on a series of graphic novels (what else is new?), Wright infuses his film with such original and inventive touches you can’t help playing along. This is a fantastical movie which is grounded in reality which works for me as someone who isn’t the biggest fan of flying of magic. The movie begins with the traditional Universal Studios logo appearing in pixilated 8-bit graphics and a monaural video game tone all of us who grew up in the 80s are so familiar with. It sets the tone for the film perfectly and the movie delivers in spades.

Scott Pilgrim (Michael Cera) is a 22 year old normal guy. He has some friends who have formed a rock band called Sex Bob-Omb. They are still in their, “practicing in their friend’s living room phase.” He lives with his gay roommate Wallace (a wonderful Kieran Culkin) whom with he shares a bed with. And he’s just started dating a 17 year old high school girl name Knives Chau (Ellen Wong). She’s Asian. Everyone sort of teases Scott for dating a high school girl, most of which comes from Scott’s sister played by recent Oscar nominee Anna Kendrick. But then Scott notices a girl with pink hair at a party and it’s love at first sight. This is Ramona Flowers. They begin courting and Scott has to eventually break up with Knives. I just had a thought; is it smart to break up with someone whose first name is Knives? But I digress. It turns out this colorful girl of his dreams, Romona, comes with a little baggage: seven “evil exes” who he must defeat in order to win her heart.

The movie sets up its strange tone with wacky editing and on screen graphics. For instance every time the telephone rings we get a big “RIIIINNNNGGGGG” graphic flying across the screen. We also get text which points out characters and their traits and makes sure we’re all following along. So it’s not too shocking to see when Sex Bob-Omb first appears on stage at a club for a gig, an eyeliner wearing goth dude flying through the roof and starting a fight with our hapless hero. It turns out there has been a “League of Evil Exes” formed by Romona’s evilest ex-boyfriend Gideon. Other evil exes who show up in small but memorable roles include Superman himself Brandon Routh with special vegan powers and Chris Evans as an action movie star with totally awesome skateboarding skills. Every time Scott defeats one of these Exes they burst into coins, like every other bad guy in every other video game. It’s pretty clever. Of course not ever Ex is a dude. Mae Whitman, who played Cera’s girlfriend Ann (who?) on TV sitcom Arrested Development, shows up as the “bi-furious” Roxy Richter.

Edgar Wright (who co-wrote with Michael Bacall) is such a talented and inventive director. He’s so great at taking conventional stories (zombie flick, buddy cop flick, romantic comedy) and turning them into something unique and wildly entertaining. And let’s not forget his brilliant phony “Grindhouse” trailer for “Don’t” which was wonderful. He uses visual effects to tell his story, not replace his story. And while some may find this visually overwhelming, you can’t deny the level of energy radiating from the screen. It sort of began to wear me out a little by the end, but it’s a small price to pay for such a creative, funny and entertaining movie that is a true standout in an otherwise mediocre summer at the movies. GRADE: A-