The Mexican: The Grindhouse Full Length Feature “Machete” is a Bloody Good Time 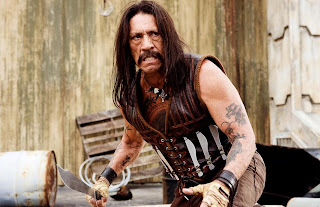 Audiences were first introduced to the Mexican “superhero” Machete in the 2004 ode to 70s exploitation flicks, “Grindhouse.” Although not too many people were actually introduced to him; “Grindhouse” was a box office stinker, unfortunately. Luckily Machete lived on in the DVD for Robert Rodriguez’s “Planet Terror” which opens with a trailer for a fake movie. I turns out Robert actually wanted to make the trailer into a full length feature and he did just that. Maybe audiences will turn out for Machete even though they’re only getting one movie for the price of one, instead of two movies for the price of one. Had the economic crisis happened in 2004, why do I have the feeling Grindhouse would be a screaming success? But here we are and Robert has given us “Machete” about a Mexican cop left for dead and wrongfully accused. Someone has just “messed” with the wrong Mexican.

Danny Trejo stars as Machete. Trejo is a character actor who has probably shown up in a movie or two you may have seen. He’s certainly a face you wouldn’t soon forget and that works with actors. Sure he may not be your standard heartthrob action hero but he can certainly kick some ass. He wields a mean, err, machete or any other sharp object. For his feature length debut Rodriguez cooks up a wonderful story all about illegal immigration. Robert De Niro, who seems a far cry from the crime pictures of the 1970s but has still got it if you ask me, plays a conservative (read: prick) senator seeking reelection. He’s running on a platform against illegal immigration. In fact, he just wants those damn Mexicans practically locked up in their homeland, even if it means shooting them himself. Jeff Fahey is his campaign manager and he sets up a complicated scenario which involves framing Machete for the attampted assassination of the senator. Now on the run, and pissed off, Machete must clear his name, and viciously slaughter every bad guy who crosses his path. And occasionally get with hot chicks.

Rodriguez knows exactly what he’s doing with “Machete.” He fills his film with over-the-top gratuitous violence (one scene involves Machete putting intestines to good use) and sexuality. Of course on and off again rehaber/actress Lindsay Lohan shows up as a coke-addled skank, a role that seems left over from her “I Know Who Killed Me” days. I’m sure her career will bounce back. One day. “Machete” is in the vein that he and Quentin Tarantino set up so well in “Grindhouse.” I hope all the fake trailers, which were arguably the best part of the “Grindhouse” theatrical experience, could one day be adapted into real feature films. I still think that “Planet Terror,” and “Death Proof,” are technically better films and come to think of it, I guess that’s why those movies bombed. Rodriguez and Tarantino (who I'll say is much more talented of the two) made really good movies that happened to be an homage to really bad movies. They were cult films made with big budgets. They were meant to be bombs, like their original counterparts, so it makes sense that they wouldn’t be box office sensations.

I’m interested to see how audiences will react to “Machete.” I wasn’t around in the 1970s so I have no idea how authentic this movie is, but it seems to fit in that grimy era from what I’ve read and seen. All of the performances are purposely over-the-top. Everyone is in on the joke. The film is pretty funny too. I’m not too sure everyone who sees the film will “get it” and I’m not really sure general audiences are craving mainstream exploitation films in their local multiplex, but what better way to end the summer than a badass Mexican kicking some major whitey butt? As an ode to a certain era of films, it's certainly a whole lot better than Stallone's attempt with the dreadful flick "The Expendables."GRADE: B