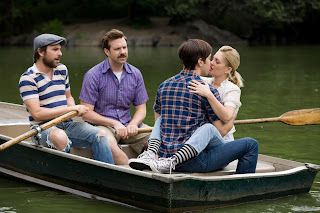 It is known that the success of a romantic comedy depends on how much you want the main couple to stay together. In bad romantic comedies you hate them and want them to just die already (see “The Break-Up” for instance). This genre is also known for rampant clichés and stereotypes. We always get the main characters discussing their love lives with their best male or female friend, a gay best friend, or a brother or sister. There’s always that big reveal that forces the couple to break up only to be reunited in the end. Some of that stuff makes itself known in “Going the Distance” but besides a few clichés here and there, this is a refreshing romantic comedy that actually has laughs and you don’t need to feel embarrassed for actually having liked it.

I enjoy Drew Barrymore. She’s not the world’s best actress but she knows how to get the job done. She’s appealing. She sort of feels like a real life person, instead of a glamorous movie star. And Justin Long, he’s just a handsome nerdy guy who doesn’t exactly radiate movie stardom. So when Erin (Barrymore) and Garrett (Long) find each other bonding over their mutual love for the arcade game Centipede (of the non-human variety) it seems genuine rather than forced. I imagine most people who fall in love bond over a mutual interest rather than just locking eyes the way, for instance, Jennifer Lopez and Alex O’Loughlin fall for each other in the recent flick “The Back-Up Plan.” Erin and Garret seem to have a lot in common and enjoy spending time with each other until, six weeks later, it’s time for Erin to fly back home to San Francisco where she’s attending graduate school. Rather than miss a great opportunity to have a really great relationship they decide to stay exclusive, even if they’re more than 2,000 miles apart. And here lies the film’s “dramatic conflict.” Can two people have a successful romantic relationship when there are so far apart?

The film is pretty enjoyable for what it is. It doesn’t transcend the genre the way the recent “(500) Days of Summer” did, but that was a very unconventional type of movie. “Going the Distance” plays it straight, and rather safe, but that doesn’t mean there aren’t positive qualities here. Director Nanette Burstein who cut her teeth directing documentaries tries out her first fiction film with decent success. She goes for a more realistic look at relationships and even employs a lot of handheld camerawork. The script, by first time screenwriter Geoff LaTulippe has worked in some pretty good stuff. I particuarlly enjoyed everything about Charlie Day’s character Dan (I’m a big fan of his work on It’s Always Sunny in Philadelphia). For instance, when Erin and Garrett begin to share their first kiss he blasts “Take My Breath Away” because he can hear them talking about Top Gun through their apartment’s paper thin walls. Also Chrstina Applegate shows some great timing as Erin’s older and married sister. The whole thing sort of has a Judd Apatow-light feeling, which is a good thing.

“Going the Distance” begins to stumble over itself as it enters its third act because honestly, how much can they really do with a story about two people in love living across the country from each other? That’s really the movie’s only conflict which it establishes during the entire middle section of the film. We don’t know if Erin will end up moving back to New York or if Garrett will quit his job and move out to California. That’s about it. Besides a final act that seems to be stretched a little thin, “Going the Distance” is definitely one of the better romantic comedies out there. It has charming actors and some witty observations; you can’t really ask for more when it comes to this stuff. GRADE: B

We are a group of volunteers and opening a new
scheme in our community. Your website provided us with valuable information to work on. You've done a formidable job and
our whole community will be grateful to you.